A visit to Morocco is like taking a journey back in time – it’s everything you imagine it to be and so much more. It is a country of startling contrasts due to the legacies left behind by its past rulers and inhabitants: starting with the earliest records from Phoenician times, then coming under the sway of Carthage, followed by the Romans and from the 7th century the Ottomans, and finally, the French. This has created a unique and utterly compelling country which today, although relatively close geographically, remains delightfully exotic, mysterious and unspoilt.

Marrakesh is Morocco’s most vibrant city, full of myths and mystery. Today it’s an anachronism, one of the most exciting and romantic places you will ever visit, with one foot in the present and one firmly in the past. It was once an oasis on the ancient caravan routes to the south, soon becoming a natural centre of commerce and consequently, during medieval times, Morocco’s capital. Vast wealth poured in from nearby Moorish Spain and skilled artisans built the city you see today.

Surrounded by almost intact medieval ramparts, ochre-coloured Morocco boasts some amazing buildings. Dominating the traditional low-rise skyline is the astounding minaret of the Koutoubia Mosque, towering at more than 60 metres high, visible for miles around and a classic example of Moorish architecture. Then there are the Saadian Tombs, the intricately decorated final resting place of the descendants of Mohammed, plus the spectacular Royal Palace and a host of other wonderful things to experience.

The city’s maze of tiny streets is interspersed with tranquil gardens watered for centuries by an ingenious underground water system that still functions after all these years. At the heart of it all though is the immense Jemaa el-Fnaa, Africa’s busiest square and the site of one of the world’s greatest spectacles, especially atmospheric at dusk. Here, bustling street restaurants serve all kinds of delicacies with mouth-watering aromas filling the air, set in what can only be described as a medieval circus. Storytellers recount tales of old, while courageous fire-eaters and skilled acrobats entertain the eager crowds. Scribes pen letters while barbers are busy at work. Underscoring the whole scene is the heavy drumbeat of musical troupes playing their instruments, the sights and sounds of which are enchanting. The balmy warmth of the Moroccan evening adds to the atmosphere, and all this under an ocean of stars makes for a fabulous experience.

The Moroccans themselves display legendary hospitality: culturally bound to offer help to visitors, they are extremely friendly, generous and open. One of the great delights when exploring Morocco is its exciting cuisine, and Marrakesh is a veritable food-lovers’ paradise. Whilst our tour is on a half-board basis, to get an authentic taste of the local cuisine, you may choose lunch in the hotel, instead of dinner, to try the city’s myriad of atmospheric restaurants and sample the local delicacies. Most famous is the pastilla, a legendary pastry prepared with pigeon or chicken flavoured with cinnamon and honey. Indeed, renowned TV chef Robert Carrier once stated that there are three outstanding cuisines in the world: French, Chinese and Moroccan. Join us on this exhilarating tour of one of the world’s most fascinating cities and experience all its wonders for yourself.

You arrive at the airport to take your flight to Marrakesh. On arrival, we will transfer to the excellent four-star superior Hotel Opera Plaza where we stay for five nights. Set in its own private landscaped grounds shaded by glossy-leaved palm trees, this luxury hotel is ideally located, allowing easy access to the sights of the old city. All the rooms are comfortable, air-conditioned and well-appointed in a contemporary design. There are three restaurants and dinner is included in the main restaurant which serves international cuisine; you may wish to upgrade to either the Italian or Moroccan ‘à la carte’ restaurants. After a day of wonderful sightseeing, you can relax in the chic lounge bar or the cosy café bar. There is also a large outdoor pool (open during the summer months, weather permitting) and a spa overlooking the hotel gardens. 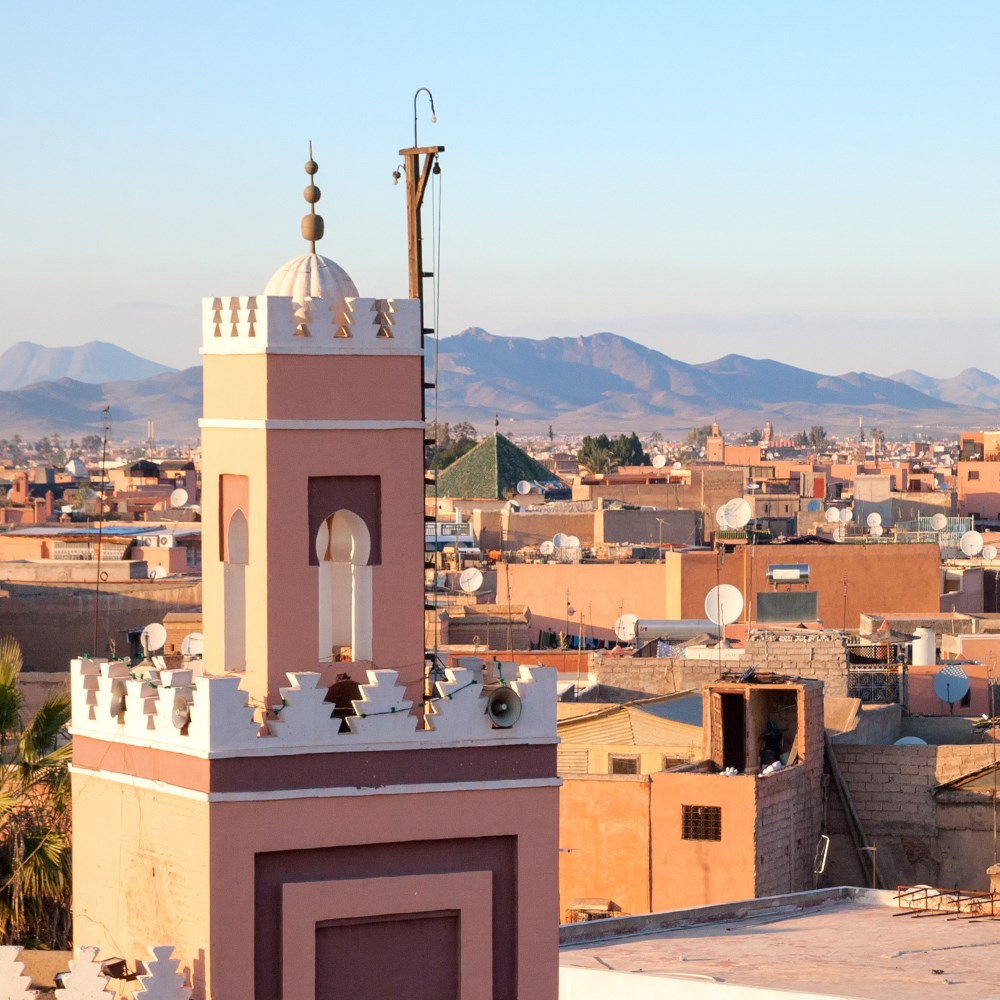 Marrakesh is a labyrinth of tiny alleyways teeming with activity like few other places in the world. With classic, French colonial buildings and boulevards surrounded by remarkably preserved medieval walls, the city is so perfect it could be, and often is used as, a film set.

This morning, we enjoy a sightseeing tour during which we will see the Saadian tombs, one of the world’s finest examples of Moorish architecture, where classic archways are covered in gold leaf and stucco work. Plus, we will experience the Bahia Palace, which when built was acclaimed as the world’s most beautiful palace, famed for its 50 marble columns.

We also visit the famous souks or covered markets, where immensely skilled craftsmen create intricate leatherware, jewellery and furniture. At dusk, after dinner in the hotel, we visit the Jemaa el-Fnaa square, a showcase for traditional Moroccan life. You will experience a fantastic spectacle of musicians, dancers, fortune-tellers and snake charmers in an exhilarating kaleidoscope of colour. 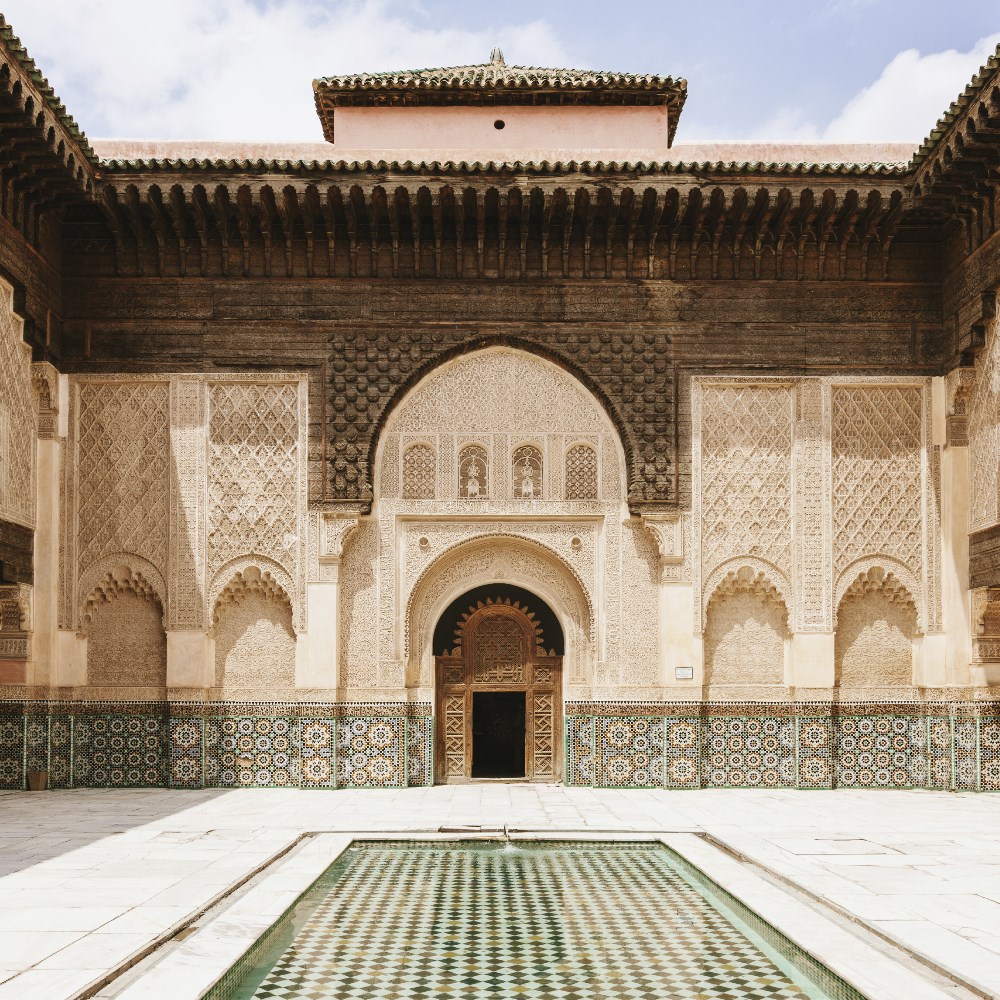 This morning, we continue our tour of marvellous Marrakesh. The city boasts a wealth of wonderful gardens, some vast with olive groves and lakes, providing a haven of peace and tranquillity away from the hustle and bustle of the city. One of the prettiest parks is the Jardin Majorelle: an amazing display of bamboo, bougainvillaea and cacti, formerly owned by Yves Saint-Laurent. Surrounding the city are impressive ramparts stretching 19 miles long, still largely intact with imposing forts at various intervals. The gates are fine examples of classic Moorish architecture with their pastel hues changing colours depending on the time of day and the intensity of the light.

The afternoon is yours at leisure to further your exploration of Marrakesh at an unhurried pace, or relax in your hotel and take advantage of its excellent facilities. 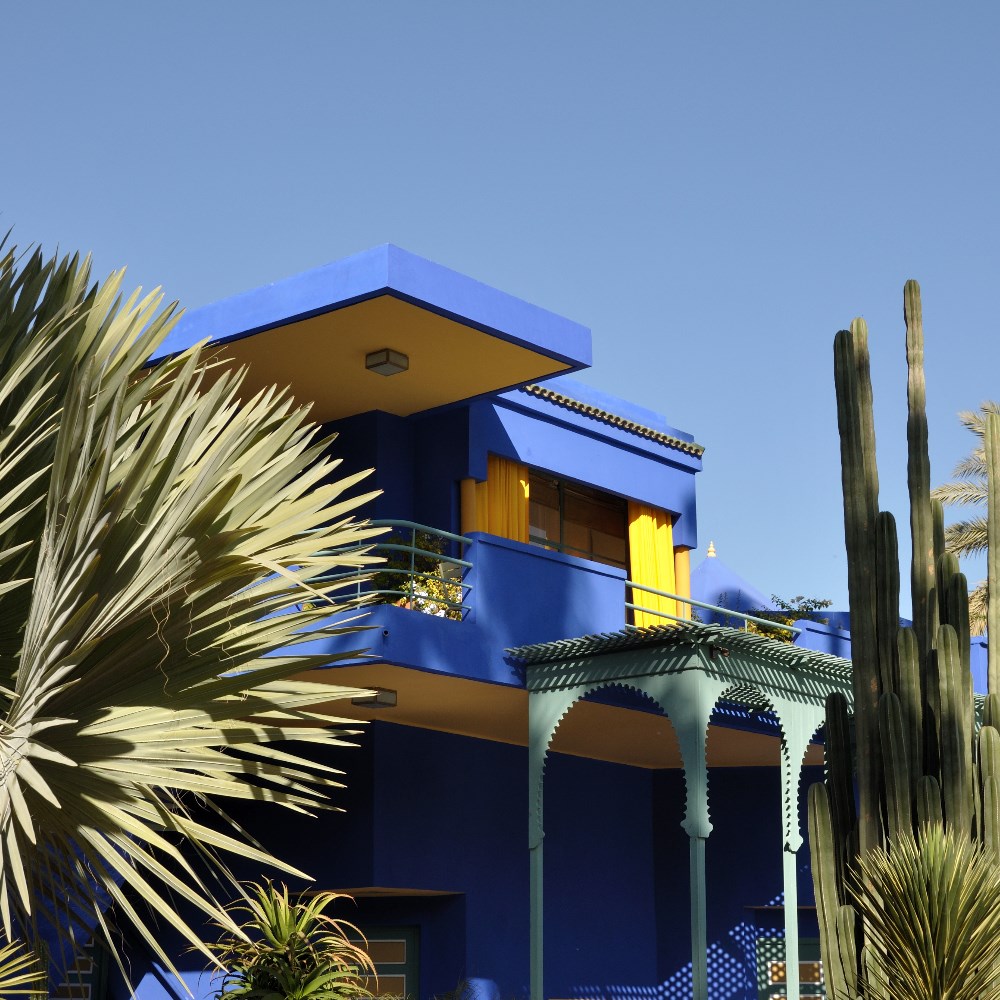 Our day begins with a comfortable drive to the delightful coastal town of Essaouira, which came to prominence during the 15th century when the Portuguese established the medieval citadel that still stands today. Within its walls are a maze of tranquil squares and perfectly preserved streets, lined by whitewashed houses and pavement cafes. It’s a sheer pleasure to stroll through the markets here, where the stalls groan under the weight of colourful fresh fruit and vegetables. Or simply wander along the harbour, bustling with a hive of activity and where fishermen repair their nets as they have done for centuries.

Essaouira is so charmingly unspoilt it has been featured as the location for several blockbuster productions, from Orson Welles’ Othello to Ridley Scott’s Kingdom of Heaven. During your journey, the real Morocco unfolds and the landscape changes from fertile green plains to a moon-like semi-desert, occasionally studded with palm trees. Mud-brick villages blend perfectly into the background, while shepherds of all ages tend their herds of sheep and goat – the transport of choice here is very much the donkey. 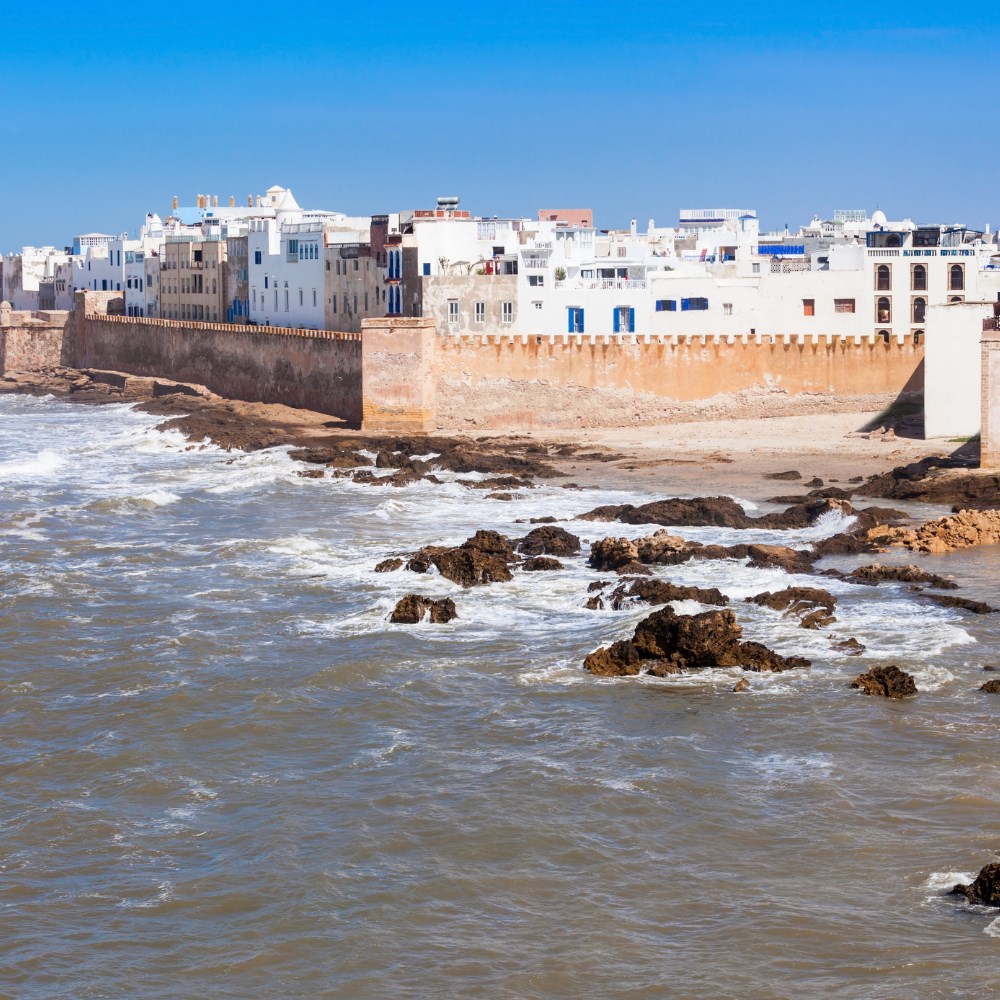 Forming an ever-present backdrop and adding to Marrakesh’s wondrous setting are the soaring, snow-capped Atlas Mountains. This morning, we take a drive into the stunning foothills with the countryside evolving from saffron-coloured fields to steeper, wooded slopes, slashed by dramatic, river-filled gorges. Mammoth peaks soaring more than 3,000 metres high spear the vivid, blue sky while the desolate mountainside stretches before us. Then the forests commence, rolled out like a massive green carpet and beyond, misty plains stretch to the horizon in a patchwork of muted colours. There’s time to take in the spectacular vistas when we stop to stretch our legs and perhaps enjoy a cup of coffee or tea.

After a morning of sightseeing, we return to Marrakesh in the early afternoon. The rest of the day is at leisure, giving you ample time to make the most of your final day in this wonderful city. 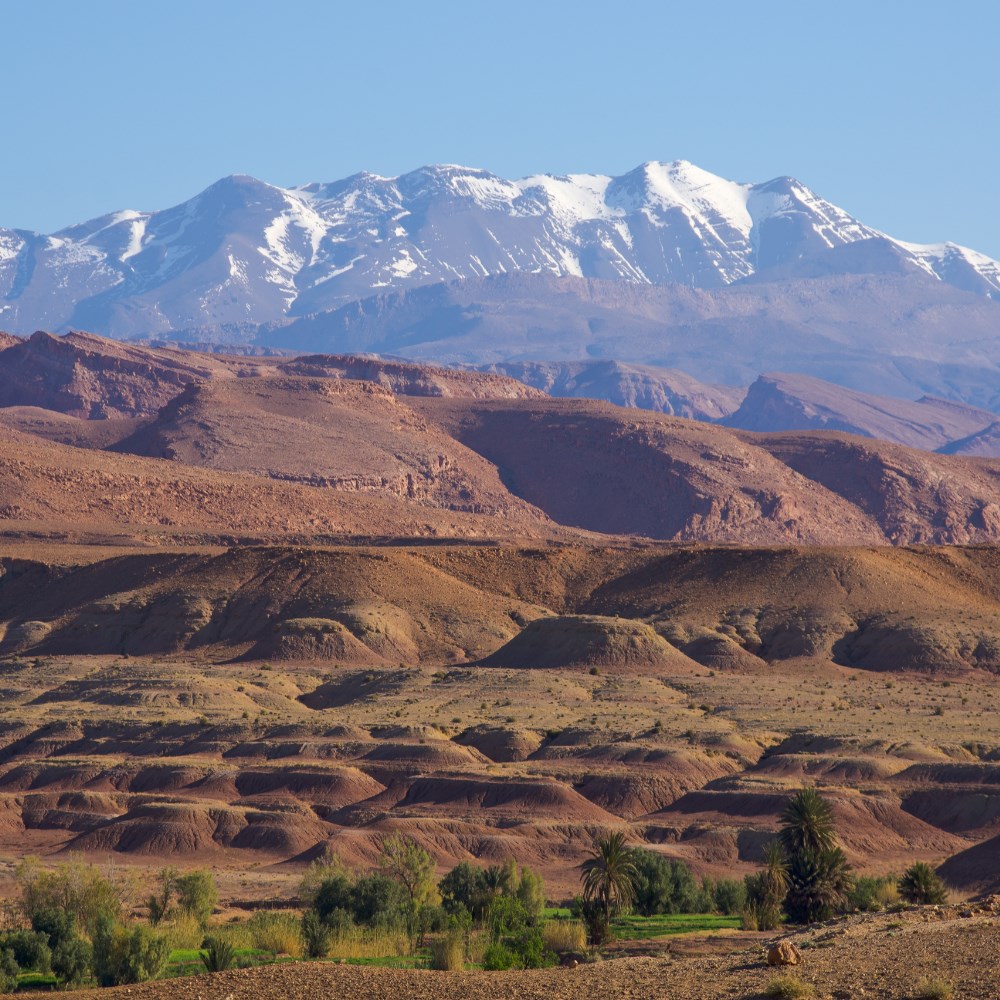 The price of this holiday is per person based on two people sharing a twin room. Single rooms are subject to availability the relevant supplement. The price includes:

Enjoy a Moroccan gastronomic experience in Marrakesh - from £36 per person

Attend La Maison Arabe’s world renowned cooking workshop, where a professional chef will teach you how to create a delicious and authentic Moroccan dish. Then you’ll feast on your culinary creations with your fellow cooks.

UK Citizens do not require a visa to enter Morocco however must have a valid passport. For the most up-to-date passport and visa information visit https://www.gov.uk/foreign-travel-advice/morocco/entry-requirements

Please consult your GP regarding the appropriate inoculations at least a month before departure.

Our holiday was a good mix of relaxation in between visiting the various sites. Our Tour Guide Youssef was most informative and always ready to help us get a little extra, with visits to other lesser known parts of the sites. Our...

Well Riviera, you have done it again! Thank you for a fabulous holiday to Dubrovnic and the Dalmation coast! Stunning scenery, good hotels the last on Argosy excellent! The tour well organised agreed there is a lot of coach tra...