Enjoy the festive season on the fabulous Bay of Naples, where the gentle, subtropical climate provides a welcome escape from the cold of the UK. As well as the convivial company of fellow solo travellers, enjoy the cultural highlights of Naples and Pompei with towering views of Vesuvius from your hotel as you indulge in a Christmas feast.

Our base for this tour is the picturesque town of Sorrento, now sprinkled with Christmas cheer. The resort came to prominence during the late 18th century when, attracted by its mild climate and outstanding natural beauty, Europe’s aristocracy chose to spend their winters here, staying in sumptuous properties and grand hotels built along the cliff tops.

There’s colour everywhere you look in its compact network of tiny streets and quaint squares: rich berry reds, jewel tones and lavish golds are set against a twinkling backdrop of fairy lights. Quaint Christmas decorations adorn the windows of pastel-coloured houses whilst the majestic Christmas tree takes centre stage in Piazza Tasso. Mouthwatering aromas drift from the numerous restaurants and trattorias, some humble and homely, others grand and ostentatious, with pavement cafés serving cappuccinos on every street corner.

We stay in the Hotel Aminta, a beautifully presented four-star hotel with modern touches and timeless elegance. Set amidst lemon and olive groves with breathtaking views of Vesuvius and the twinkling coastline of the Bay of Naples it is the perfect setting for an uplifting December escape.

Arrive at the airport for your flight to Naples, where you will be welcomed by your tour manager or a member of the Riviera Travel team. On arrival, you’ll be transferred to the four-star Hotel Aminta in the splendid town of Sorrento, with breakfast and dinner included. This evening there will be a drinks reception hosted by your tour manager so that you can get to know your travelling companions before dinner at the hotel. 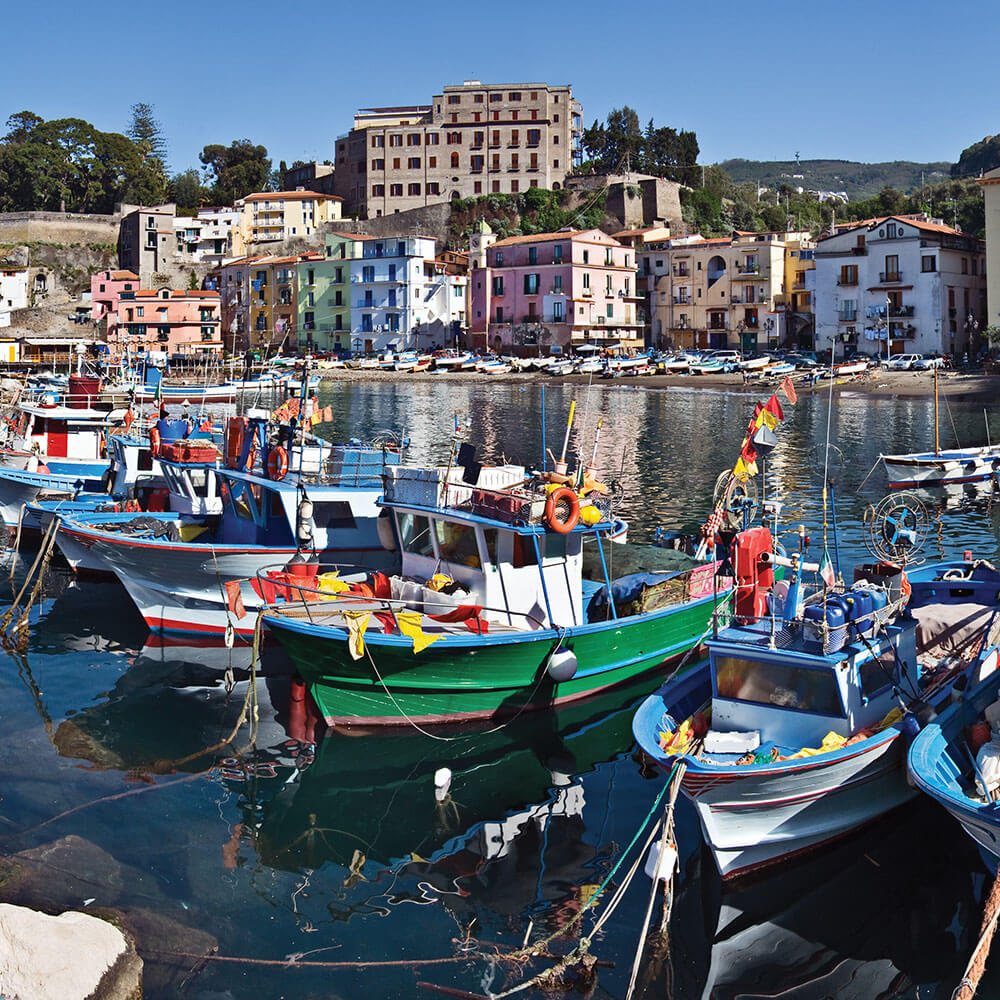 Our first full day in this centuries-old resort is at a suitably relaxed pace, beginning with a short walking tour. The Romans appreciated Sorrento’s many qualities and the area is dotted with the remains of their opulent villas. You’ll be enchanted by its maze of narrow alleyways, where the ochre, yellow and magenta facades and winding streets are now delightfully decorated with strings of endless garlands, ruby-coloured poinsettias and carefully hand-crafted Nativity scenes. By night, the palm trees are adorned with twinkling lights, adding extra festive splendour to the bustling atmosphere of this quintessential Italian town.

The region has a long history of lemon cultivation, with highly prized Sorrento lemons given their own protected IGP (Indicazione Geografica Protetta) status. Sixty percent of lemon production goes into making limoncello liqueur, but in Sorrento it seems that anything can be made from the local citrus fruit, including soaps, cosmetics and, of course, ice-cream. 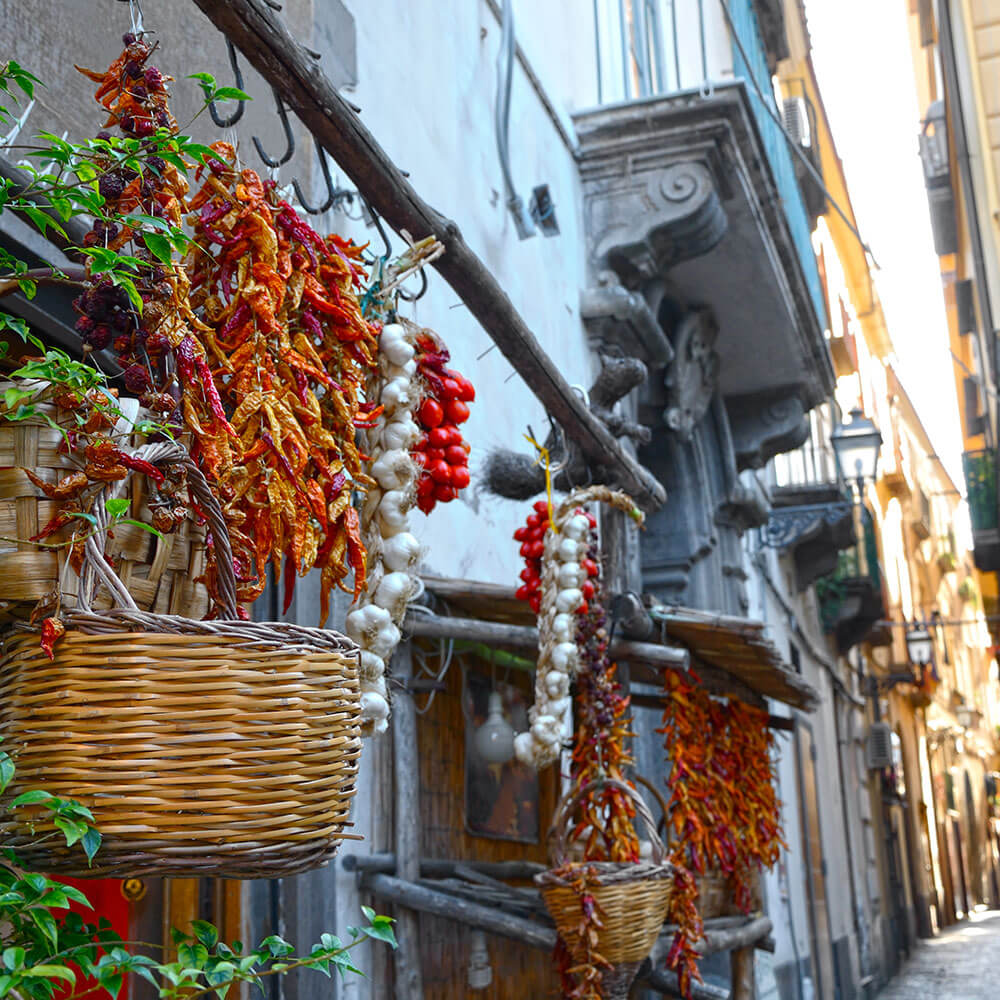 Today we drive north around the bay to the cosmopolitan city of Naples, whose UNESCO-listed historic core is recognised for its wealth of monuments. During our walking tour of the old town, a local guide will share fascinating stories about the city’s millennia of history, the local culture and, naturally, the street food, which we’ll also get to sample. From struffoli to susamielli, the Neapolitan’s take Christmas so seriously that they have countless traditional Christmas desserts hailing from the region. Struffoli are an inviting combination of deep fried rolled doughballs, studded with glistening glacé cherries, oranges and a dusting of cinnamon. Whilst mustacciuoli are a diamond-shaped festive treat made from spiced cake dipped in dark chocolate or candied fruit.

Piazza del Gesù Nuovo, Naples’ beautiful main square, is flanked by the Gothic Santa Chiara basilica, a rare example of medieval architecture in Naples, and the stunning Gesù Nuovo church. The past is very much alive as we stroll along Via dei Tribunali, the main street during ancient Greek and Roman times; today it remains the beating heart of old Naples and where pizzerias and family-owned shops jostle for attention amidst centuries-old ruins. Another highlight is San Gregorio Armeno, the city’s delightful Christmas street filled with colourful shops dedicated to the festive season – at all times of the year. But Christmas is particularly special, as you’ll witness first-hand the skilled craftsmen working on intricate presepi, the delicate crèche figurines which bring the Nativity story to life, alongside the lively symphony of locals going about their day.

There’s free time after the tour, so why not explore the archaeological museum, the finest in all Italy, or perhaps visit the massive Castel Nuovo that dominates the portside? You could even try an authentic Neapolitan pizza which the city is so famous for. Naples’ magnificent cathedral is worth a visit even if it’s just to marvel at its neo-Gothic façade. Later we return to the hotel in plenty of time to get ready for our delicious four-course Christmas Eve dinner. 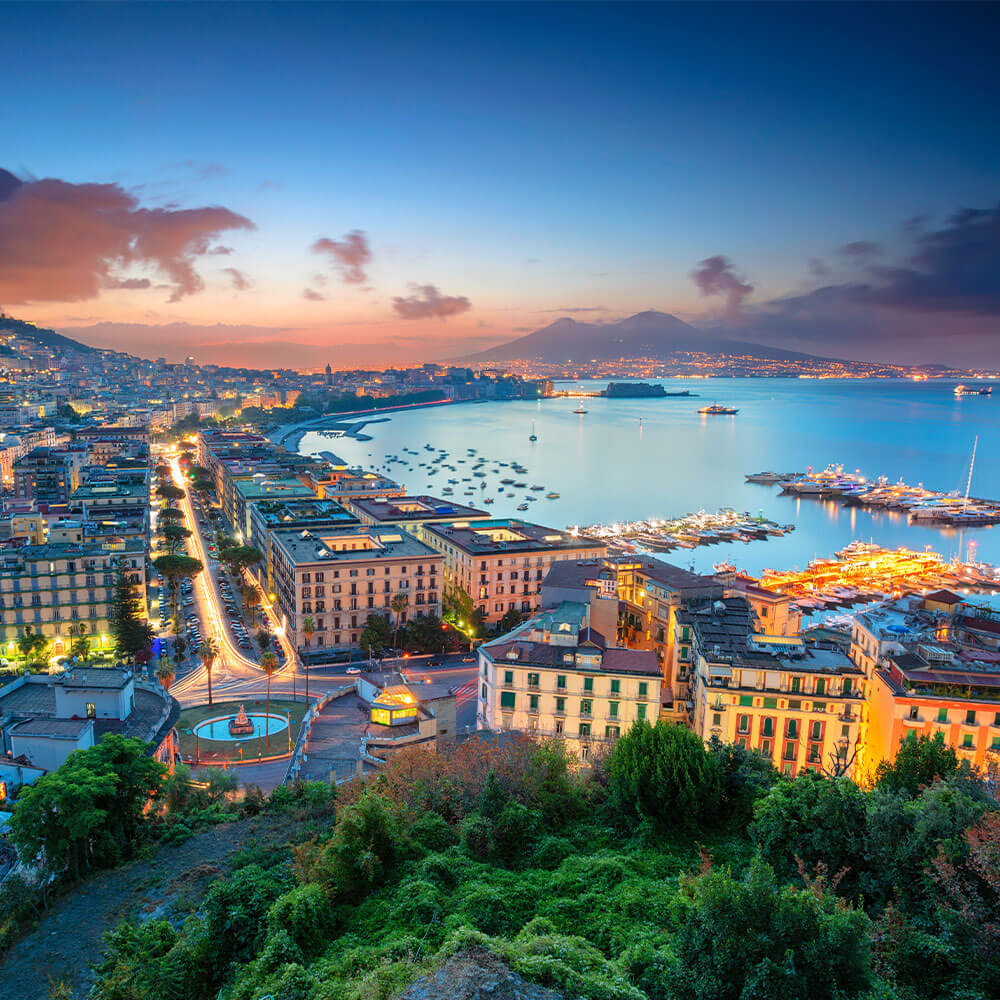 Today is a day for dolce far niente, sweetly doing nothing, which the Italians have elevated to an artform. Sit back in one of the hotel’s comfy chairs by the bar, sit on the terrace and admire the view of Vesuvius, or if you are feeling particularly energetic you can take the hotel’s complimentary shuttle bus to Sorrento’s old town for a leisurely passegiato to build up an appetite for lunch, which will be a four-course banquet. For those wishing to walk to the heart of Sorrento there is a scenic path, Via Capodimonte, which is just over a mile (although you may wish to take the shuttle bus back up the hill to the hotel). 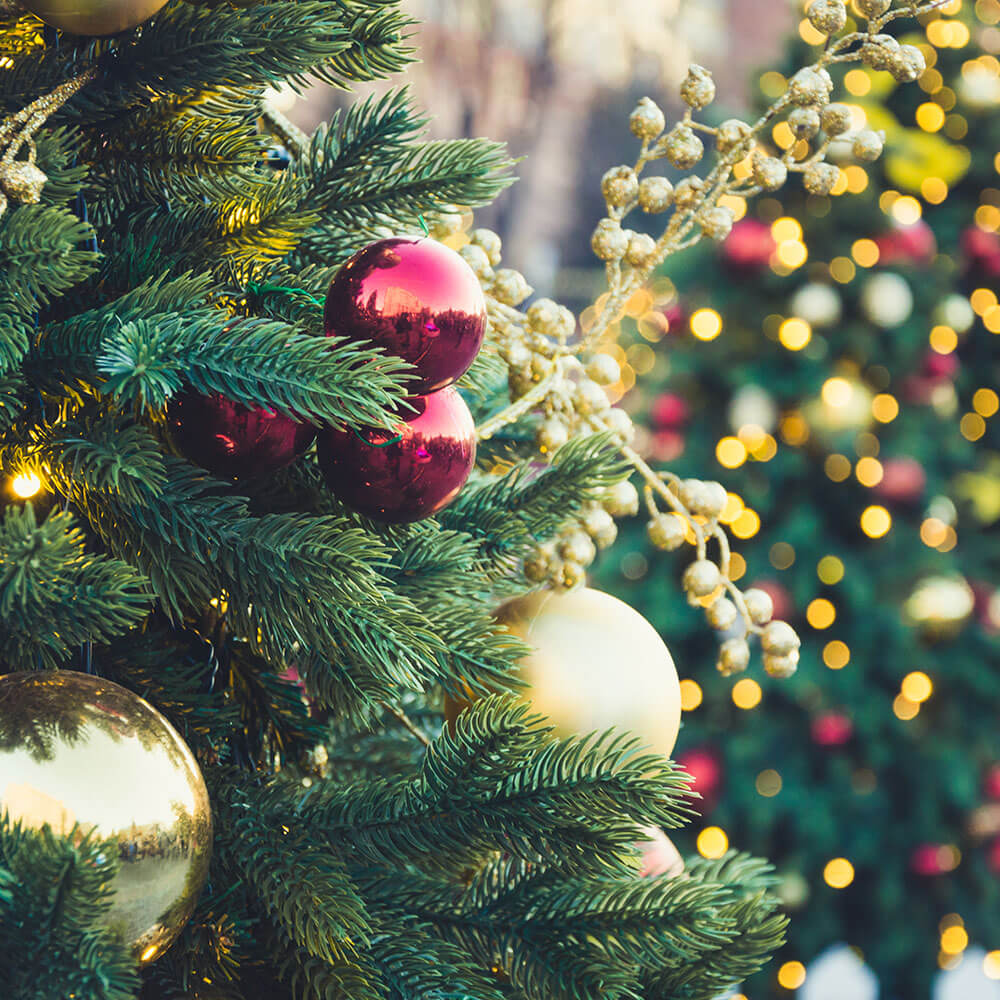 Most people know the story of Pompeii and its fate, but today this site is so much more than a collection of ruins. Our guided tour of the Roman town highlights its astonishing state of preservation – even if you aren’t especially interested in history, you can’t fail to be impressed by its scale – streets, temples, baths and even the amphitheatre remain largely intact. Much of our knowledge about the Roman way of life, their habits, social structure, class system and domestic arrangements has come from Pompeii. Many buildings still have murals and mosaics, while others inscribed with graffiti describing political events, romantic entanglements and even gossip of the time. You can even see traffic-calming measures and a one-way system!

Although endlessly fascinating, Pompeii is also slightly eerie, particularly when you see the pained facial expressions of Vesuvius’s victims preserved for eternity. A fascinating site, new discoveries are still being found every month: a well-preserved fresco of fighting gladiators, the remains of a horse and saddle and an ancient snack stall are amongst the latest finds.

In the evening we will sit down together for a farewell dinner and reminisce on a splendid Christmas experience in Sorrento. 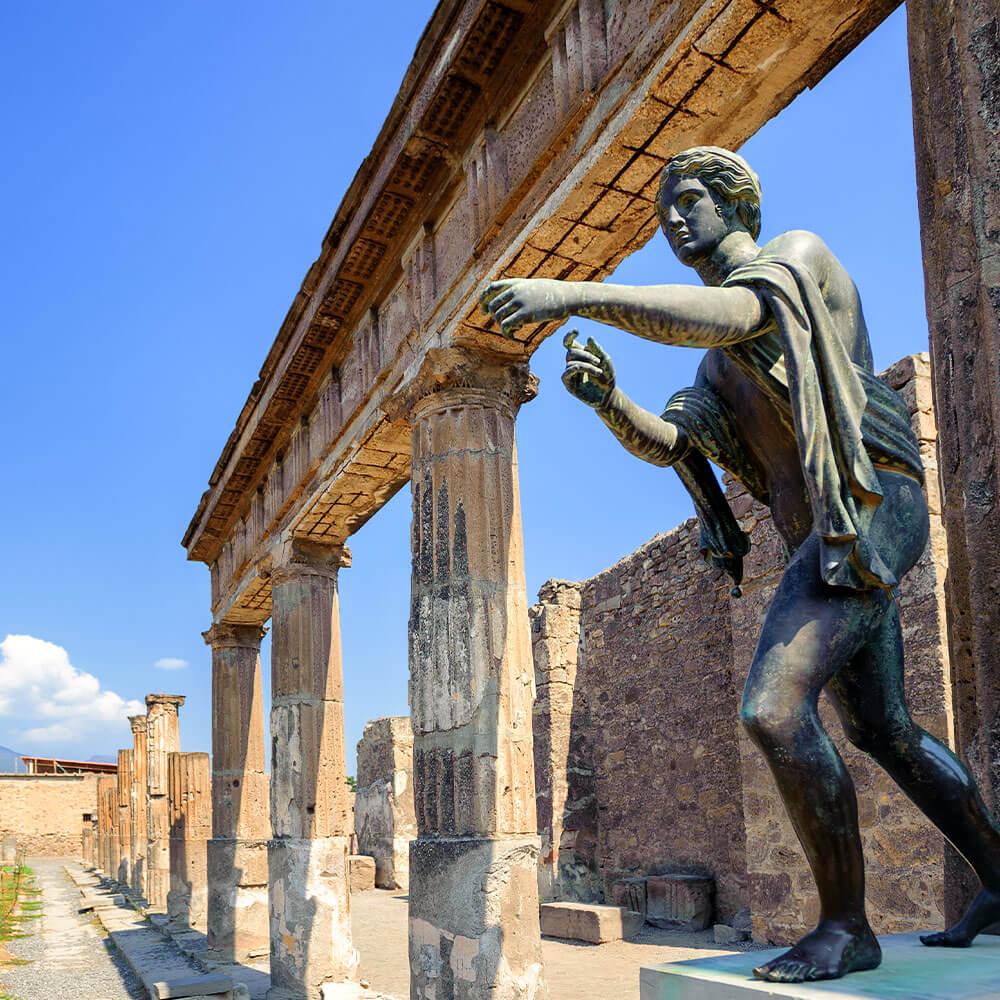 Transfer to the airport for our flight home.

Not included: Museum entries in Naples.

UK Citizens do not require a visa to enter Italy however must have a valid passport. For the most up-to-date passport and visa information visit https://www.gov.uk/foreign-travel-advice/italy/entry-requirements

Washington DC, with its Capitol Building, the White House and many more famous historic monuments is fabulous and nearby George Washington’s home. And Arlington Cemetery; truly moving. Amtrak to New York and a cacophony of soun...

Together with my sister and my 92 year old father, I have just returned from The Blue Danube River Cruise aboard the MS Thomas Hardy. What a magnificent ship; what a superb cruise; what fantastically helpful staff and tour manager...