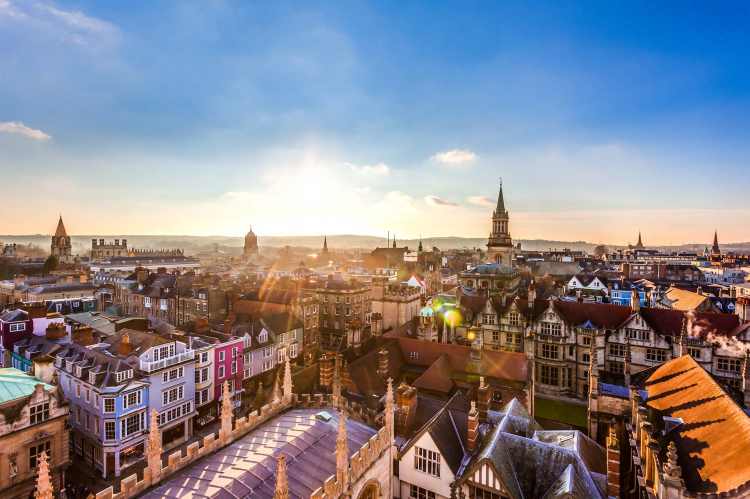 Historical landmarks, areas of outstanding beauty and traditional British villages – just a few elements that make this the perfect place to explore. Based in the academic city of Oxford, there’s plenty to discover in its ancient streets and beyond. Our journey begins with a river boat tour and afternoon tea, with an expert guided tour to follow. Here we experience one of the oldest and most famous libraries in Europe with a tour of the Bodleian Library. There are also visits to the UNESCO-listed Blenheim Palace and Hidcote Gardens, one of the UK’s finest Arts and Crafts gardens. A trip to the Cotswolds wouldn’t be complete without a tour of its towns and villages with their famous  honey coloured Jurassic limestone buildings and cobbled streets of its towns and villages, and so we tour the rolling countryside, stopping at the likes of Bourton on the Water, Stow on the Wold and Chipping Camden, with time to explore.

Whether by road or rail, make your way to your four-star hotel in Oxford, chosen for its excellent amenities and central location. If you require assistance with any travel arrangements, be sure to get in touch with our Travel Concierge who will be happy to help in any way they can. Just a stone’s throw from the prestigious Magdalen College, the riverside and Oxford Botanical Gardens, our base is the perfect spot from which to explore Oxford, with many landmarks within walking distance.
However this afternoon we experience Oxford from a difference angle, with a leisurely boat trip along the river Isis. And what could be more fitting as the cherry on the cake of this beautiful British city than a quintessential afternoon tea? Enjoy deliciously dainty sandwiches, scones and cakes as this relaxing afternoon cruise sails downstream from Folly Bridge taking in the best known reach of the River Thames in Oxford.

Travelling down the University Regatta Course we pass Christ Church Meadows, the University College Boat Houses and other landmarks on our way to Iffley lock. This is often a busy and vibrant section of the river where training rowing crews, punts and pleasure boats jostle for river space in a wonderful display of Oxford at play. Passing through the lock at Iffley is an experience in itself. The river scenery and fascinating buildings combining to form a picture perfect location. Beyond Iffley we travel in to the tranquil water meadows that surround Oxford and there are abundant opportunities to spot wildlife amongst the green banks and overhanging willows. We turn for home at Rose Island, a favourite destination of Lewis Carroll and Alice Liddell on their river journeys.

We are used to seeing Oxford on our screens with Morse, Lewis and many other TV shows and films, more recently His Dark Materials and Discovery of Witches. However, like many historic cities, full of little gems and hidden passages, the best way to the heart of Oxford is by foot. So, after breakfast, we continue exploring this historic city with an Oxford walking tour lead by a specialist guide. Known as the ‘City of Spires,’ this iconic city was founded in Saxon times and has been home to scholars for the last 800 years. Some even dub Oxford the “Brains of a nation” – though Cambridge academics may disagree! As we wander the streets, we will see some of the oldest colleges, wander beneath the Bridge of Sighs, discover its green spaces, and soak in the atmosphere.

After a short break, our historical journey continues to one of the oldest working libraries in the world – of course it can only be the Bodleian. Storing a copy of every single book ever printed in the UK – though not all housed in Oxford – it’s arguably one of the most famous libraries of all. It truly is a breathtakingly beautiful place, and so there will be plenty of time to uncover its secrets in an expertly guided tour. You may even recognise some parts from films too – especially if you’re a fan of Harry Potter!

The rest of the day is yours to explore – so what’s it to be? You could climb Carfax Tower, visit the Ashmolean Museum or walk in the footsteps of Tolkien, Lewis Carrol and 38 former Prime Ministers. You’re simply strolling amongst history at every turn, and so even enjoying a drink in a historic inn or exploring the covered market, dating back to 1774, feels like you’re stepping back in time. This evening enjoy dinner at the hotel.

DAY 3THE COTSWOLDS AND HIDCOTE GARDENS

THE COTSWOLDS AND HIDCOTE GARDENS

After yesterday’s exploration of historic Oxford, today we experience the rural natural landscapes of the Cotswolds and contrasting manicured gardens of Hidcote.

It’s no wonder the Cotswolds is declared an area of outstanding natural beauty with its rolling hills and meadows that lead to chocolate box, honey-toned towns and villages. In its entirety, this wonderful part of the world covers nearly 800 square miles across 5 counties. In Medieval times it was a centre for the wool trade, with the name Cotswolds coming from the Old English term for “sheep enclosure”. This prosperous legacy is illustrated with the wide market places, grand architecture and the fine merchant houses. Today we experience the best of the area, stopping at the likes of Bourton on the Water and Stow on the Wold, with time to explore.

Known as the Venice of the Cotswolds because of its attractive stone bridges that cross the river Windrush, Bourton on the Water is a typical Cotswolds village waiting to be explored. We also call in at Stow on the Wold - at 800ft above sea level it’s the highest of the Cotswolds villages. Found on the Fosse way where several roads meet, look out for St Edwards church, with its doorway flanked by ancient Yew trees, or perhaps enjoy some refreshment at England’s oldest inn, The Porch House. A fine example of the Cotswold’s elegance, we also pass through beautiful Chipping Camden with its sophisticated terraced high street.

After a morning of picture-postcard villages, we move onwards to the National Trust owned Hidcote Gardens. Created by Lawrence Johnson, it’s one of the most influential Arts and Crafts Gardens in the UK. Although not a professional gardener, he was a very talented amateur, who was influenced by Luytens and Gertude Jekyll. Let your senses be taken over by each garden room, every one different from the next, and stylishly separated by hedges rather than conventional fences.

This morning begins with a visit to Woodstock, Old English in origin, meaning “a clearing in the woods”. With plenty of character and fawn-coloured buildings made from classic Cotswolds stone, there’ll be time to potter the streets of this charming market town.

Later, we immerse ourselves in the lives of 18th-century dukes with a visit to UNESCO-listed Blenheim Palace. This truly magnificent place was once the site of a coach stop and royal hunting lodge in Woodstock, which later grew to the incredible place we see today. There are 300 hundred years of history in the palace to discover – and we do just that on our included entry to the house and gardens. As well as being the principal home of the Dukes of Malborough, it’s also the birthplace of Winston Churchill, and somewhere he came to revisit and cherish over the years. You can even follow his path around the estate to see these favourite beauty spots for yourself.

The house is a masterpiece of Baroque architecture and is the only “non royal” home that can be called a palace. Delve into its unique history as you explore the magnificent state rooms, looking out onto its beautiful formal gardens and extensive parkland, landscaped by the famous Capability Brown. After some time to experience the beauty of Blenheim, we return to Oxford for a final dinner at the hotel.

After breakfast, return home feeling inspired by the wonderful landmarks of Oxford, Blenheim Palace and the Cotswolds.

The price of this holiday is per person, based on two people sharing a twin room. Single rooms are subject to availability at the relevant supplement.

•           The services of our experienced and
insightful tour manager throughout