Jerusalem and the Holy Land represent an extraordinary collection of both classical and Biblical sites unmatched anywhere else in the world. From the palaces of Herod the Great to the Sea of Galilee and the Old City of Jerusalem, the places we visit and the stories behind them are inextricably linked to the very basis of our Western civilisation, but it is only by actually going to see them that everything falls into place.

Uniquely nestling between Europe, Africa and Asia, at the heart of the ‘Fertile Crescent’, the world’s cradle of civilisation, this remarkable region probably has more remains and influences of more civilisations, religions and empires, and in such a small area, than anywhere else on earth! Fought over by countless generations, it has seen the clash of civilisations and religions since the dawn of history itself. The Canaanites, Alexander the Great, the Romans, the Saracens, the Crusaders, the Ottomans, the British: all have ruled here and all have left remarkable footprints.

We visit Caesarea, one of the three most important ports in the ancient world, plus the spectacular cliff-top fortress of Masada where the final battle of the first real revolt in the Roman Empire took place. It was in the decades leading up to the revolt that Jesus carried out his ministry and we’ll visit all the major sites associated with him, from his birth in Bethlehem, to his early years in Galilee and the final acts around Jerusalem.

We’ll also have a guided tour of Acre, the best-preserved and most complete Crusader city in the world, visited by Marco Polo, fought over by Richard the Lionheart, Saladin and even Napoleon. During more modern times we’ll find out about the British involvement and about the many challenges facing the region today.

Old Jerusalem, tiny at just one square kilometre, throughout recorded history has always been one of the world’s most evocative cities and it is no exaggeration to say you are literally tripping over monuments as you wander through its maze of streets, mercifully too narrow for motor traffic which only serves to amplify its ancient atmosphere.

Split into its four distinct quarters: Jewish, Islamic, Christian and Armenian, you notice the differences immediately as you wander amongst them. Changing little over the centuries, it is bustling, vibrant and so oddly ‘real’ it is almost a film set.

From the shores of the sparkling Mediterranean to the fertile valleys of the north, the great inland lake that is the Sea of Galilee, to the desert landscapes of the south and the lowest point on earth at the Dead Sea, our tour will cover an extraordinary panorama. So come with us and discover what makes the ‘Promised Land’ such a remarkable and totally unique place to visit.

You will be met at the airport by a member of the Riviera Travel team before we fly to Tel Aviv and transfer to the four-star Sharon Hotel for one night. 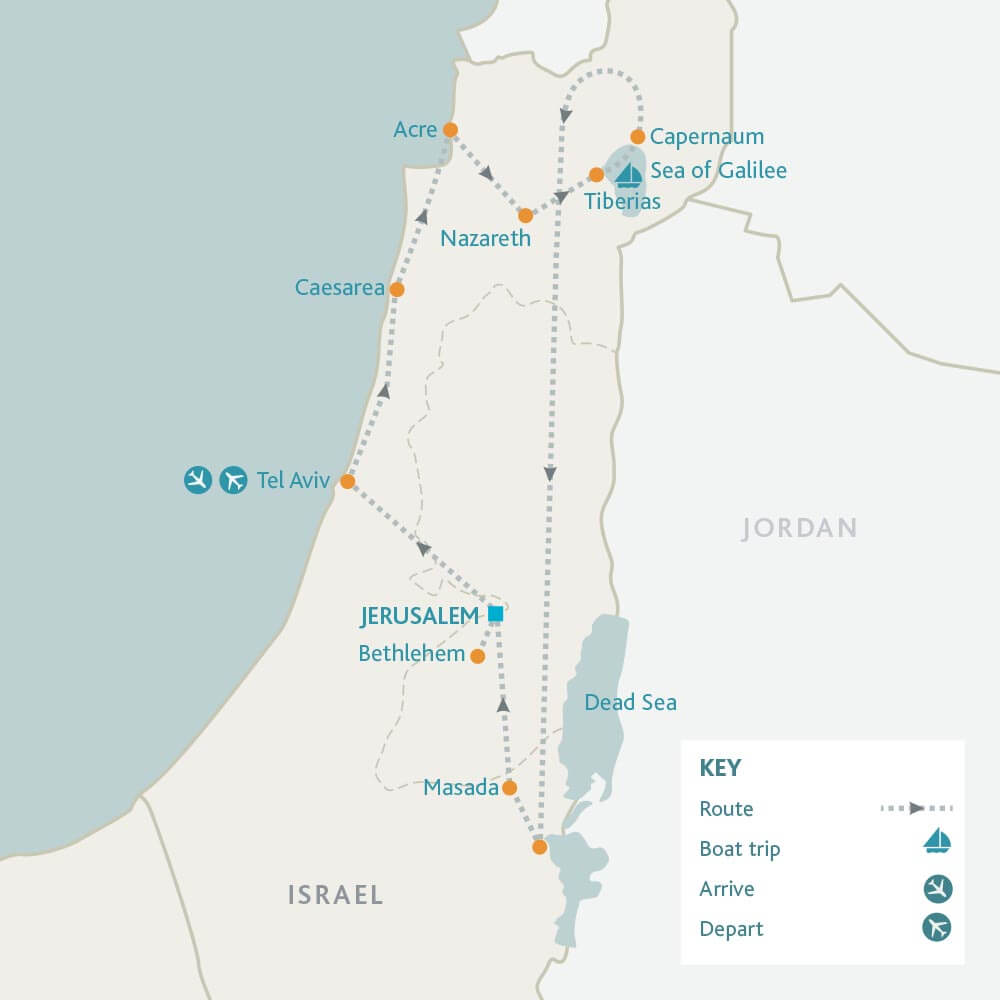 Today we visit the ancient city of Caesarea, built by King Herod as capital of Roman Judea to honour Caesar Augustus, thus ensuring he was appointed Governor, a position subsequently held by Pontius Pilate. It was the biggest port in the Eastern Mediterranean, the site of one of Herod’s magnificent palaces and today it has a host of superb remains to explore.

Next we have the 12th century, thoroughly amazing Crusader city of Acre: the beautifully vaulted and huge Knights’ Halls are in a state of almost unrivalled preservation and admirably display medieval European military architecture at its magnificent best.

Leaving Acre, we stop in Nazareth to visit the great Church of the Annunciation before continuing to Tiberias on the Sea of Galilee, where we stay at the four-star Leonardo Plaza Hotel for one night. Some tours will stay at the fascinating Kibbutz Lavi Hotel in the hills above Tiberias. Tonight we enjoy an included welcome dinner to get to know your tour manager and fellow solo travellers. 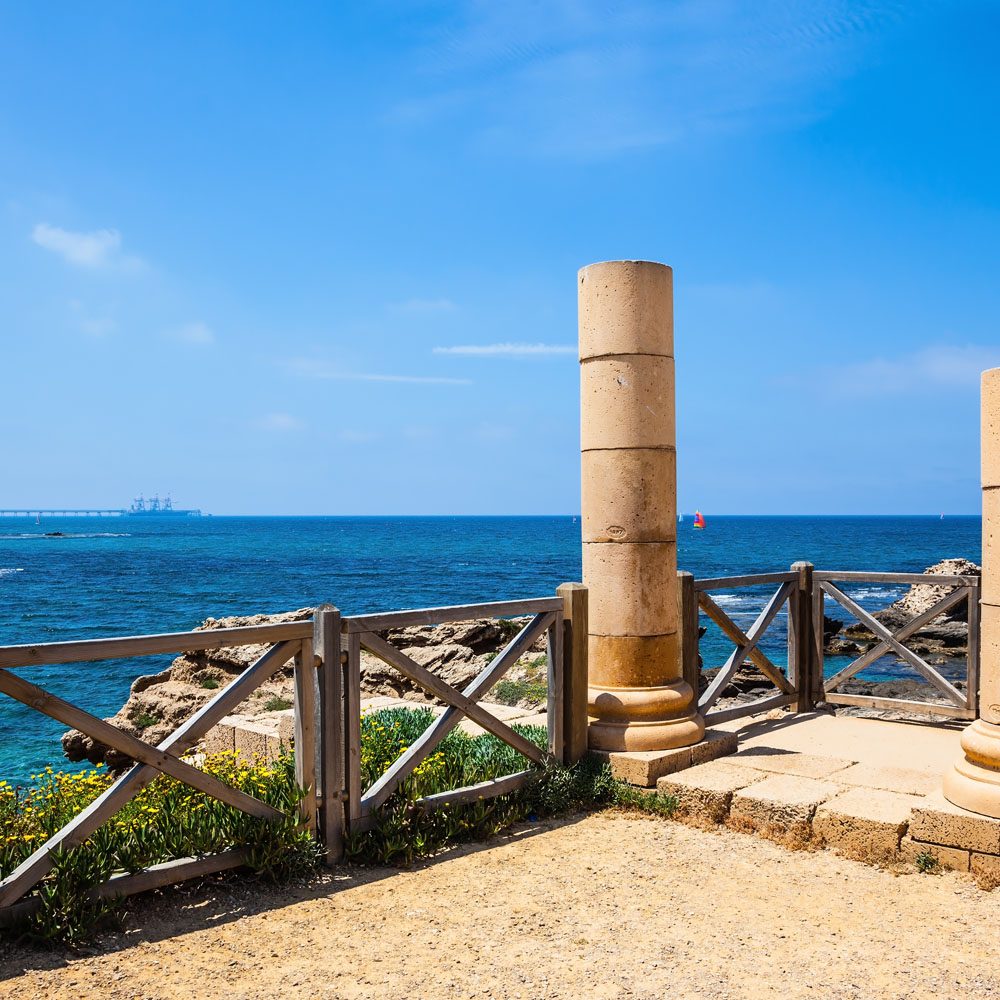 This morning we’ll be immersed in some of the most important events in Jesus’ early life. Crossing the Sea of Galilee by boat we arrive at Capernaum where Jesus lived, healed the sick and recruited his first five disciples. Nearby is Tabgha, the site of the miracle of the feeding of the 5,000. Overlooking the whole area is the Mount of Beatitudes, where Jesus gave the Sermon on the Mount. A simple octagonal church has been built, surrounded by beautiful gardens with wonderful views of the Sea of Galilee. Our hotel tonight, with dinner, is the four-star Daniel on the shores of the Dead Sea. 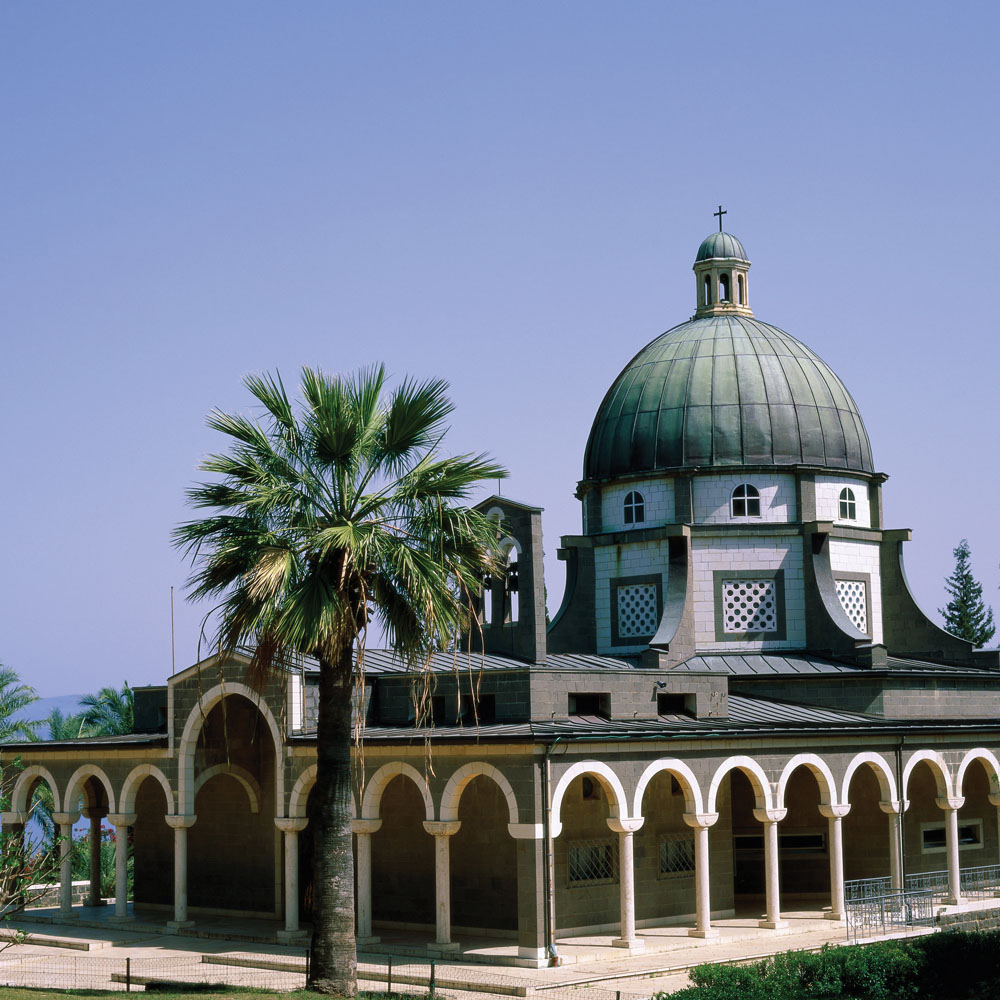 Today you can enjoy one of life’s must-do experiences - ‘bob’ like a cork in the Dead Sea, surrounded by the desert scenery of the lowest point on earth! Your hotel also offers relaxing spa treatments using salt extracts from the mineral-rich waters. Then we have the opportunity to visit the spectacular fortress of Masada - site of one of the ancient Romans’ greatest sieges.

We continue to Jerusalem and the four-star Grand Court Hotel, just next door, for four nights with dinner. 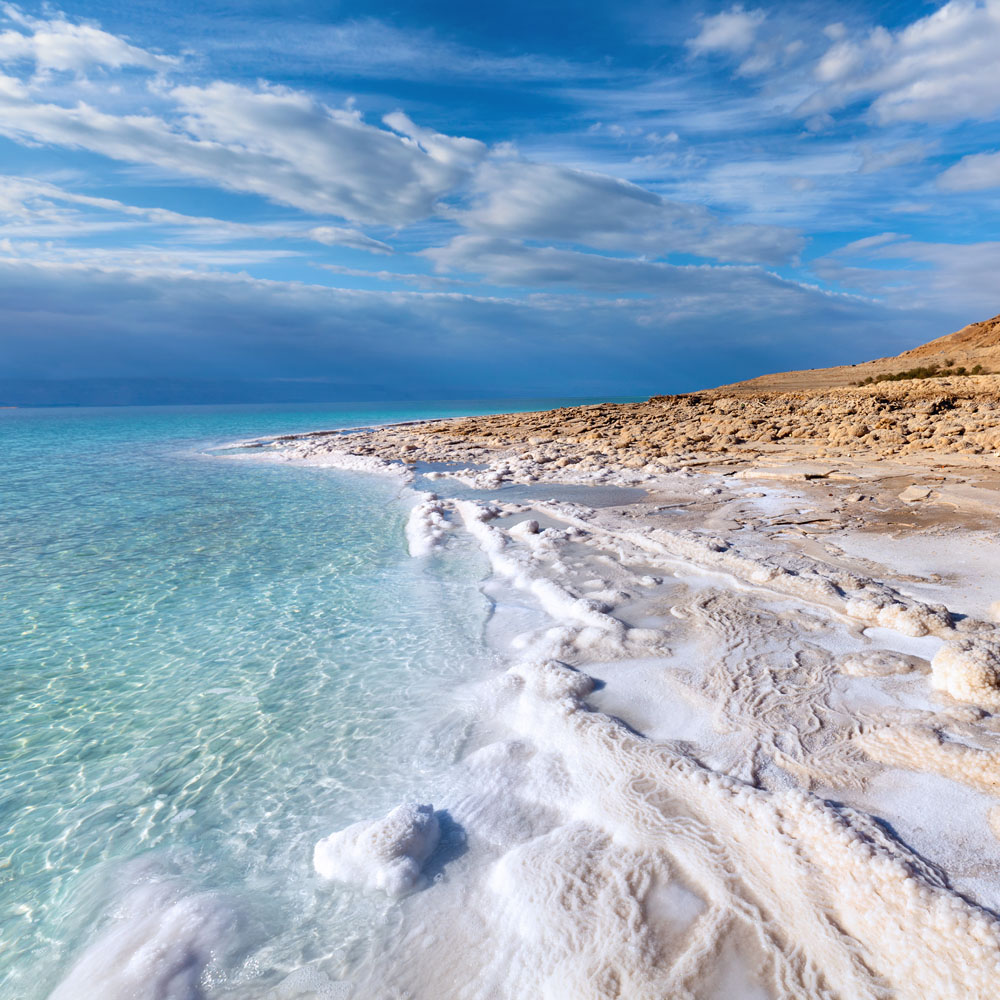 There is such an enormous amount to see, experience and absorb in this most remarkable of cities, it is almost overwhelming. Firstly we visit the Mount of Olives and the world’s oldest continually used cemetery for a panoramic view of the ancient city, punctuated by the startlingly beautiful Dome of the Rock where Muhammed rose to heaven. After touring the Garden of Gethsemane, we enter the remarkable warren of streets and alleyways that make up the Old City. Here, in such amazing proximity, lie some of the holiest places for over half the world’s population!

We visit the Western Wall and walk along the Via Dolorosa before we finally come to the Church of the Holy Sepulchre built over Golgotha, where Jesus was crucified. The richness of decoration is astounding and the atmosphere is indescribably moving. 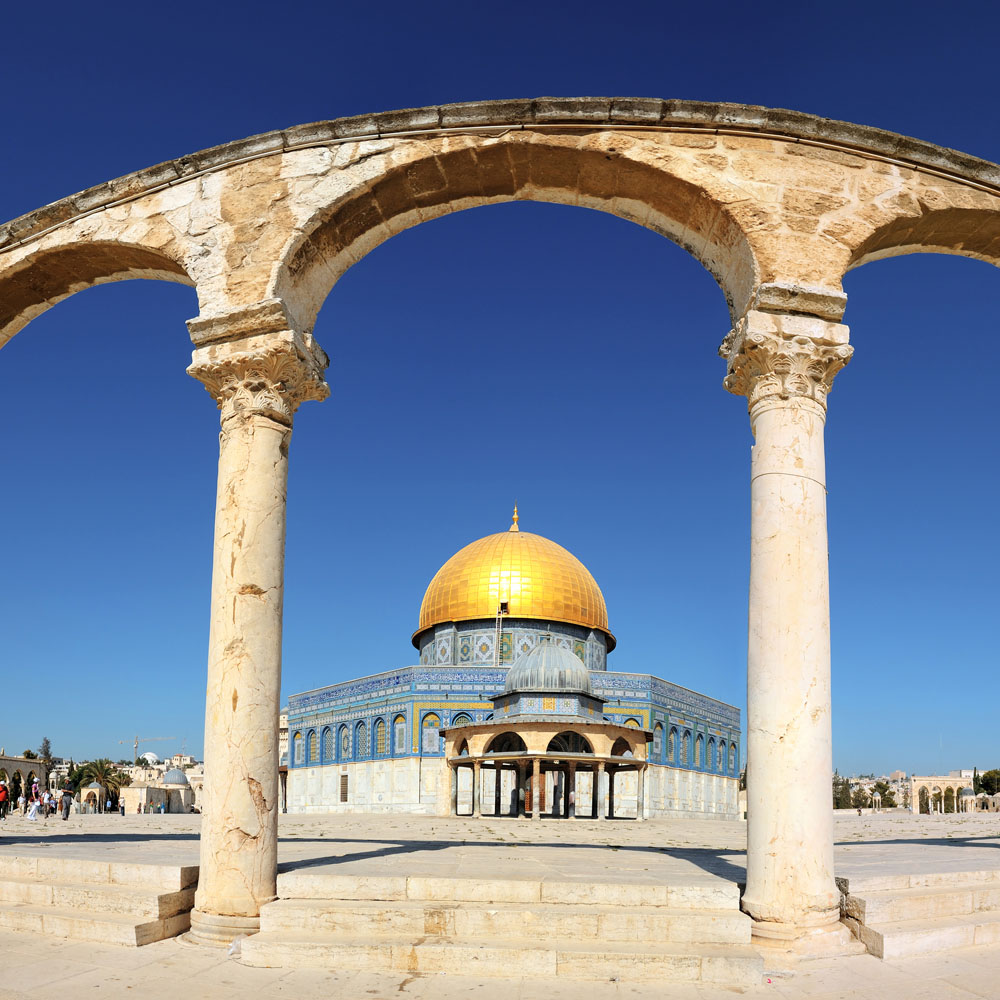 Today we drive to Bethlehem to visit the Church of the Nativity and the Shepherds' Fields. One of the oldest churches in the Holy Land still in use, it marks the site where the Virgin Mary is said to have given birth to Jesus. For centuries it was one of the most fought over holy places. It was seized and defended by a succession of armies, yet still retains fragments of mosaics and paintings from the 4th and 12th centuries. Back in Jerusalem we visit the Yad Vashem, the humbling Holocaust memorial and the Shrine of the Book where the Dead Sea Scrolls are displayed. 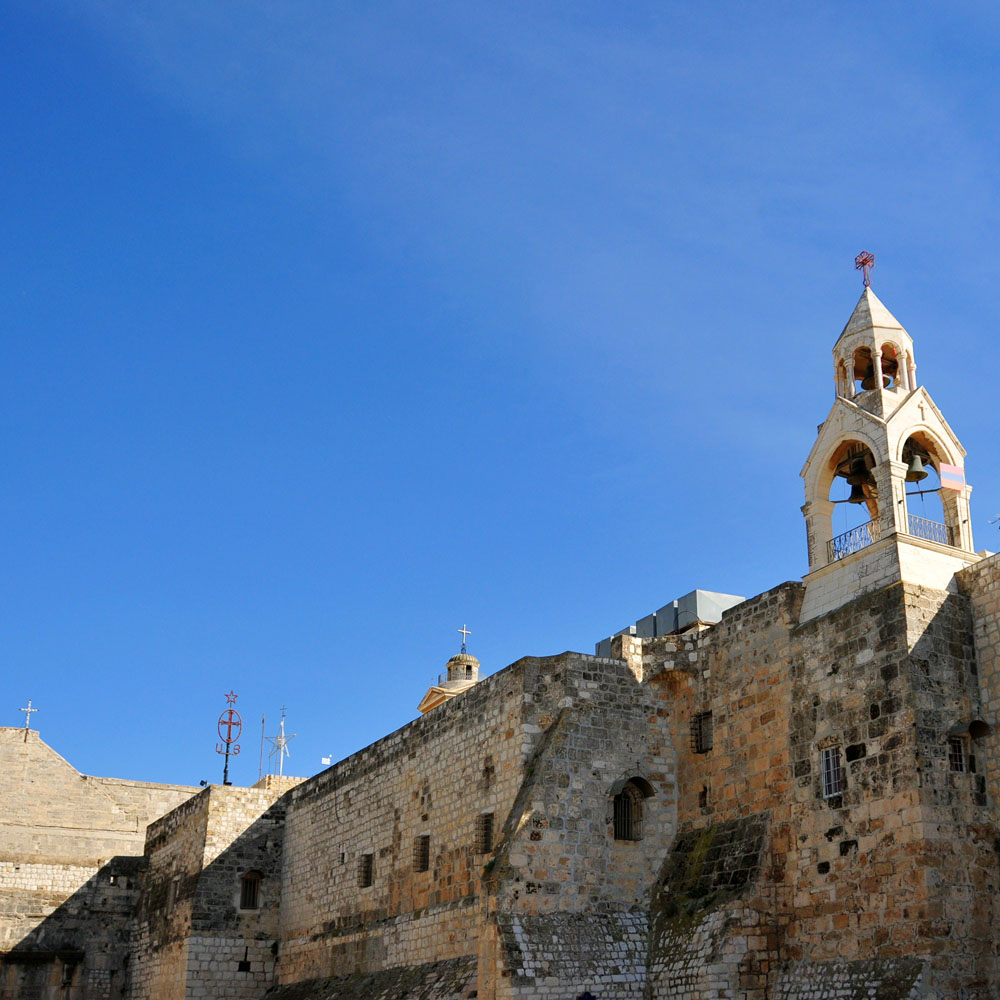 Today is at leisure. The Tower of David museum built on the remains of another of Herod the Great’s palaces provides a particularly impressive history lesson plus spectacular views over the unchanged cityscape. Then you will just love to explore under your own steam: you can see Roman shops still being used and wander into some of the quieter churches – still spectacular and where a choir’s gentle harmonies resonate throughout the alleyways. 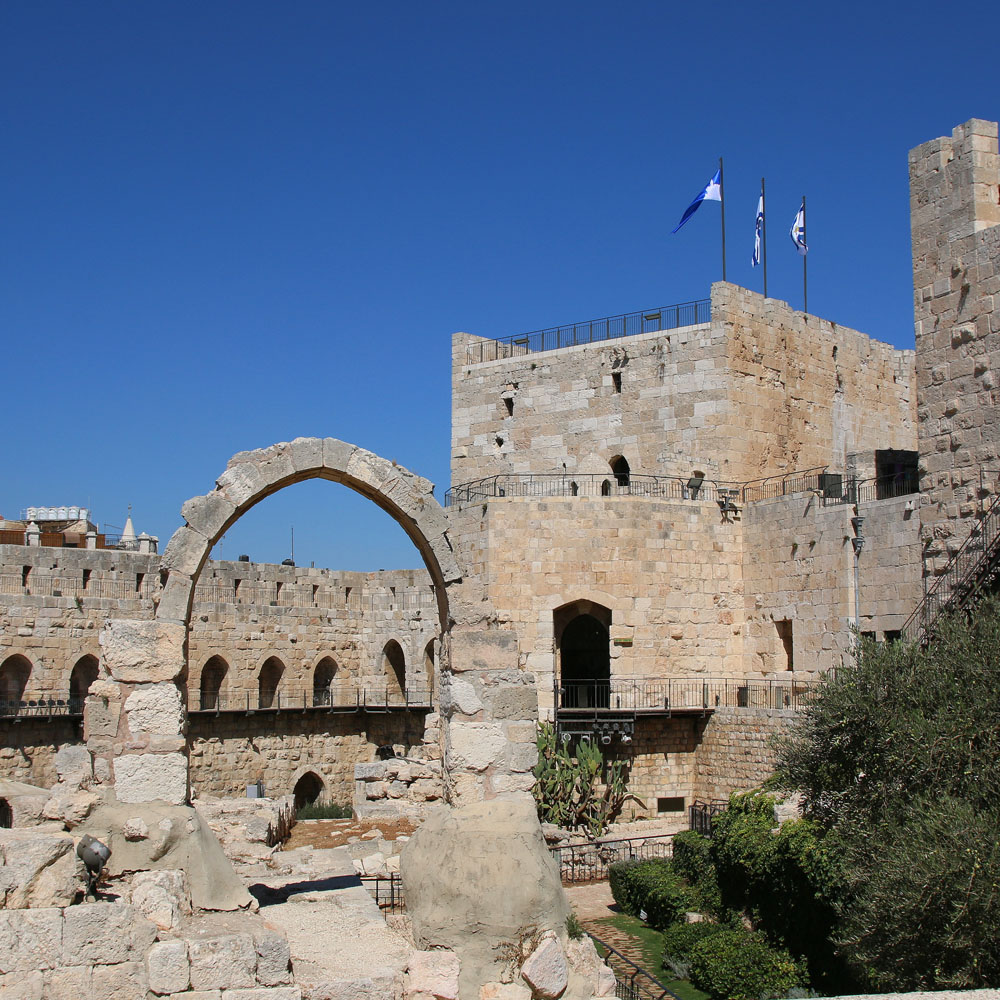 At the appropriate time you transfer to Tel Aviv airport for the flight to the UK after a truly remarkable tour.

The price of this holiday is per person based on one person in a double/twin room for sole occupancy. The price includes:

UK Citizens do not require a visa to enter Israel however must have a valid passport. For the most up-to-date passport and visa information visit https://www.gov.uk/foreign-travel-advice/israel/entry-requirements

Where the hotel features a swimming pool, it will be open during summer months depending on weather conditions.

Visits to certain sites, such as Bethlehem, may be dependent on the prevailing security situation in the region.

I’ve just returned from an extremely well organised trip to Israel. Many thanks to Francesca (tour guide) and Raya (local guide) for their professionalism, knowledge and recommendations of things to do (in the limited time we ha...

This trip was my first as a solo traveller and I was a little nervous but I needn’t have worried! The group were fantastic, the tour was brilliant and we were very well looked after from the moment we left Heathrow to the moment...