Experience unspoiled Andalucía, home of Flamenco and perhaps the most traditionally Spanish of regions. Andalucía is simply one of the most beautiful corners of Europe and is, as yet, undiscovered by the majority. It’s a land where the excesses of the twentieth century seem not to have taken root and where travellers are genuinely welcomed.

A land immortalised by the writings of Ernest Hemingway and beloved by Orson Welles, where stunningly beautiful, sun-kissed countryside, covered by green olive groves stretch off into the distance under a perpetual azure blue sky. With biscuit coloured plains, untamed rivers, deep gorges and the spectacular snow-capped mountains of the Sierra Nevada, providing the backdrop, there can be few places on earth which can boast such a wealth of natural wonders in such a small area.

Tiny whitewashed villages perch on the hilltops, with narrow winding streets where every house has window boxes crammed with flowers of every colour, adding a touch of vitality to these sleepy hamlets, little changed since Columbus’ days.

Andalucía has a long and violent past stretching from the dawn of civilisation. The Phoenicians and ancient Greeks traded, whereas Julius Caesar fought here, as did Hannibal. The region is crammed with legacies from throughout the centuries from a variety of civilisations. Without doubt, the jewels in Andalucía’s crown are the fantastic cities of Seville, Cordoba and Granada, which have some of the most important monuments anywhere on earth, many of which are designated as Heritage Sites by the United Nations and protected accordingly. Seville, home of Carmen and Figaro, boasts the world’s largest gothic cathedral. It was from here the conquistadors set sail to explore and plunder the New World and from the sixteenth century unimaginable wealth poured in, building the city we see today. Cordoba has a sixteen arched bridge spanning the river, built by the Romans and amazingly still in use and the Mezquita, built by the Moors is so beautiful and thought-provoking it is beyond words. Granada has the Alhambra, the Moorish King’s Palace so richly decorated, it shames almost anything we can conceive today.

Nowadays though, despite its pedigree, or because of it, Andalucía is perhaps the most Spanish region in the country, indeed, the popular image of ‘real Spain’ of ruined castles, sherry and bullfights has its roots here. The food is a delight, with the area noted for its seafood and its famous drink, the fortified wine from Jerez we call sherry. Try a glass of ‘fino’ - a very dry yet refreshing sherry whilst nibbling ‘tapas’ - that great Spanish titbit invention.

The people are charming – always ready to help and with an attitude towards their fellow man and a love of life so typical of Mediterranean people. So, for a unique blend of superb countryside, famous and stunningly beautiful monuments and cities, wonderful art, all set in a country which welcomes tourists as honoured guests – come with us and see.

“The grand Mezquita in Cordoba is one of the most beautiful Moorish mosques.”

You will be met at the airport by a member of the team for our flight to Malaga.  On arrival, a coach will transfer us to the hilltop town on Mijas, where we stay at the four-star Ilunion Hacienda del Sol hotel on the outskirts of town.  Tonight we enjoy an informal welcome dinner at the hotel, where we will get a chance to meet and mingle with your dedicated tour manager, as well as other people also travelling on their own. 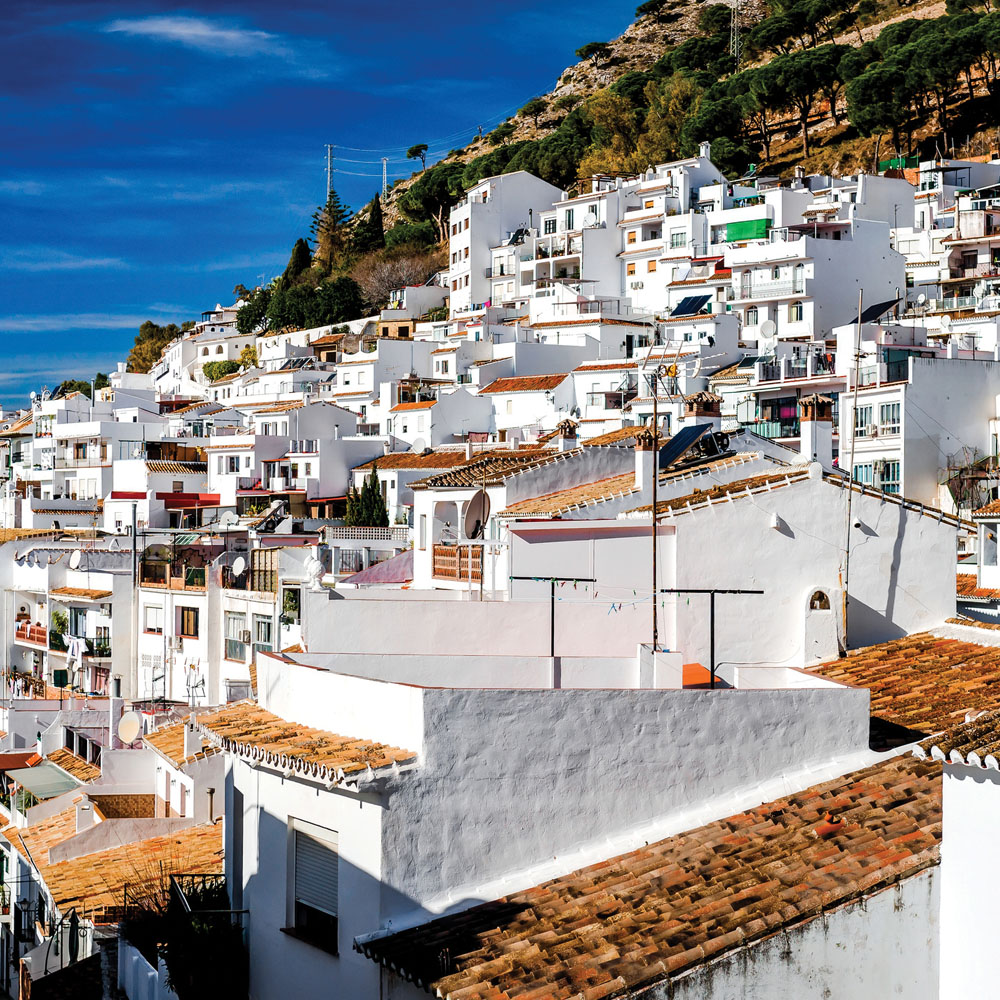 We enjoy breakfast in our hotel this morning before heading to the countryside of Andalucía and reaching spectacular Ronda.  Built on a ridge high above an impressive gorge, there are few towns that impress at first sight.  Our tour manager will give you all the information you need to make the most of your visit, and perhaps also get your first taste of authentic tapas.  We continue this afternoon through more dramatic countryside before arriving in beautiful Seville.  We stay at the centrally located three-star superior Don Paco hotel – perfectly placed for you to take advantage of some great eateries with our fellow travellers. 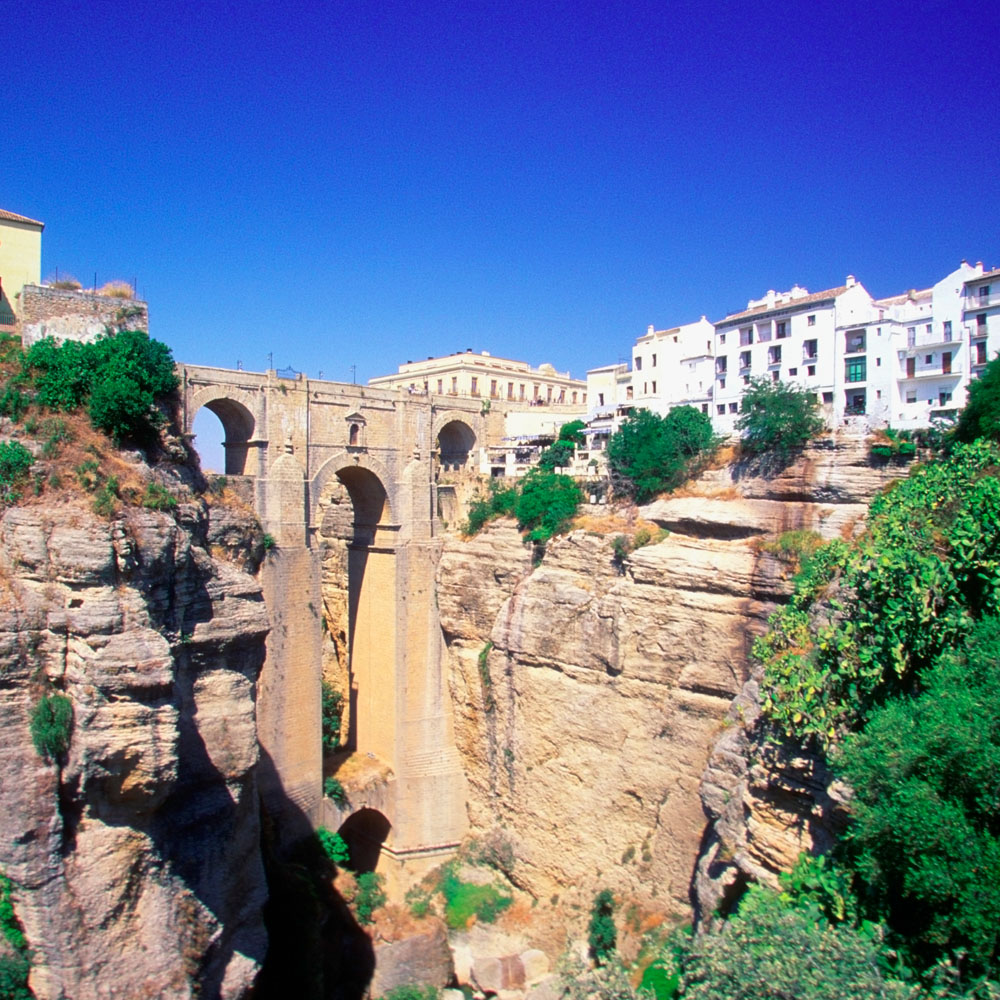 Flamboyant, seductive, fascinating … Seville is all these and more. It is simply one of the most beautiful and charismatic cities in the world, with the serene River Guadalquivir flowing through its centre, a history spanning the centuries, a wealth of historic buildings, colourful back streets and peaceful parks.

It has its origins in Roman times – the Emperor Hadrian, builder of the famous wall, came from here. During the 8th century the Moors arrived, stayed for five centuries and left a unique legacy still in evidence today. However, if one event changed Seville, it was the discovery of the New World and, fittingly, Columbus is buried in the imposing cathedral. Immense wealth poured in from Spain’s new empire and catapulted Seville into one of the largest and richest cities in Europe.

Much of Seville was built during this time and it seems to have changed little in the last 500 years, with tiny twisting streets and hidden squares where the locals hide from the midday sun in high summer. Today, though, it possesses a vibrant, cultural spirit that is very special.

The city of Figaro, this is the setting for another classic opera, Carmen. It’s also the home of flamenco, the origins of which are lost in the aeons of time. In short, this is the essence of Spain.

After breakfast we have a tour of this beguiling city, during which we’ll see the awe-inspiring semi-circular Plaza de España, a fine example of Renaissance Revival and Moorish Revival styles of Spanish architecture. You’ll also see the Tower of Gold, so named as it was used to store plunder from the Americas, and much more. During the afternoon you’re free to explore Seville at your leisure, during this time you could visit the fortified palace of the Alcázar or the world’s largest Gothic cathedral which is the final resting place of the great navigator, Christopher Columbus. Alternatively if you wish, you could take a cruise on one of the many river boats. 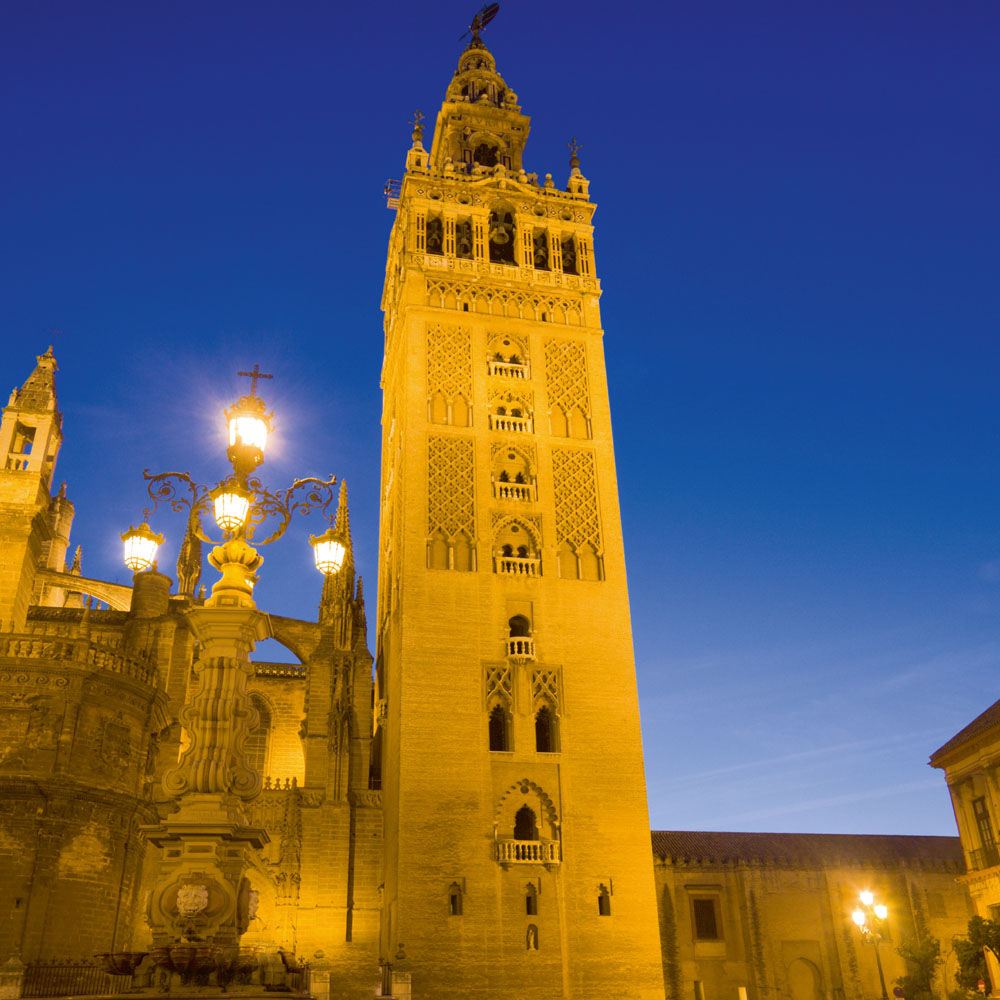 Seville offers such a diverse array of sights that today, you have a free day to do as much or as little as you wish.  Explore the Alcázar in more detail, wander around the shops of the old Jewish quarter, take a picnic to Maria Luisa Park, or maybe enjoy a glass of fino sherry alfresco with some members of the group. 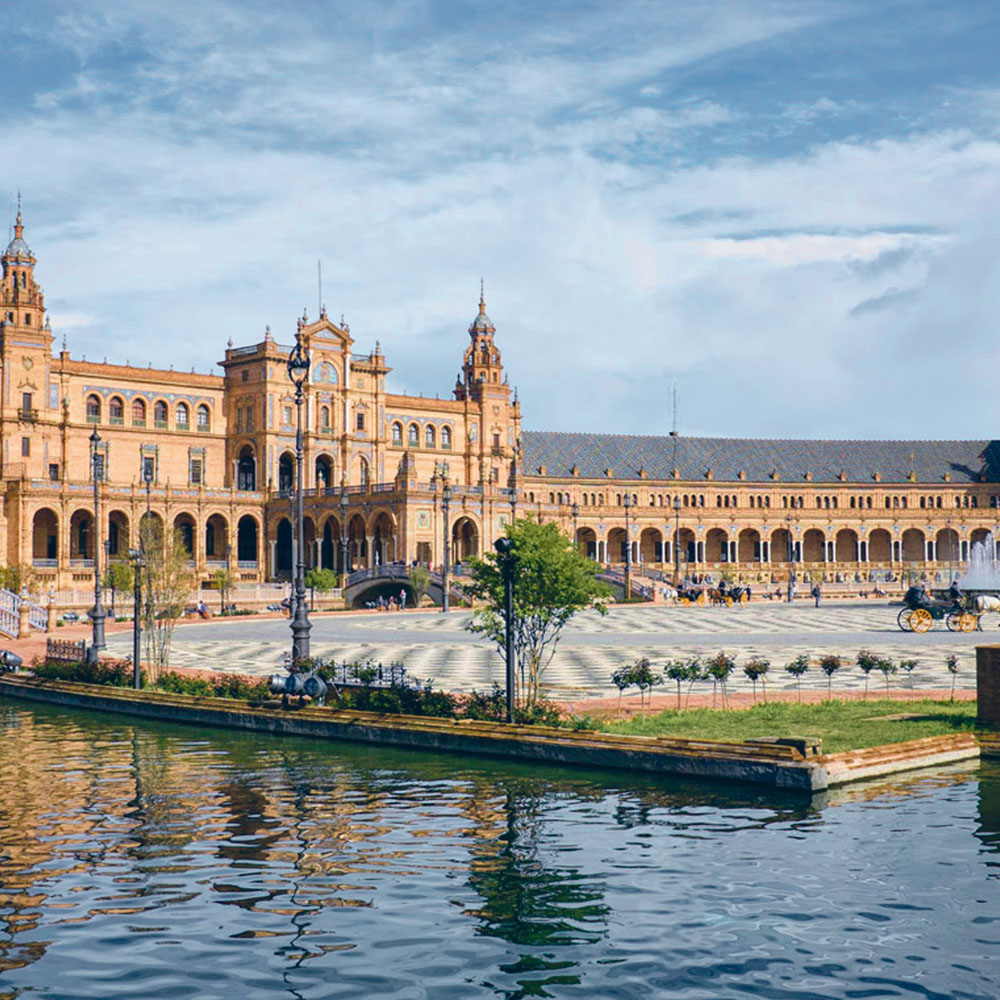 We leave Seville after breakfast this morning and we travel east to another icon of the area, Cordoba.  The Moors used Cordoba as their capital city and it was here that they built Europe’s most beautiful mosque, the Mezquita.  We will be joined once again by a local guide who will share the story of this magnificent structure and its intriguing history.  Afterwards we will have ample time to explore the twisting streets of Cordoba and step out onto its iconic bridge, before we continue our journey to Granada, where we will stay at either the four-star Hotel Alixares just a few moments’ walk from the mighty Alhambra palace, or the four-star Hotel Corona located in the heart of the town itself. 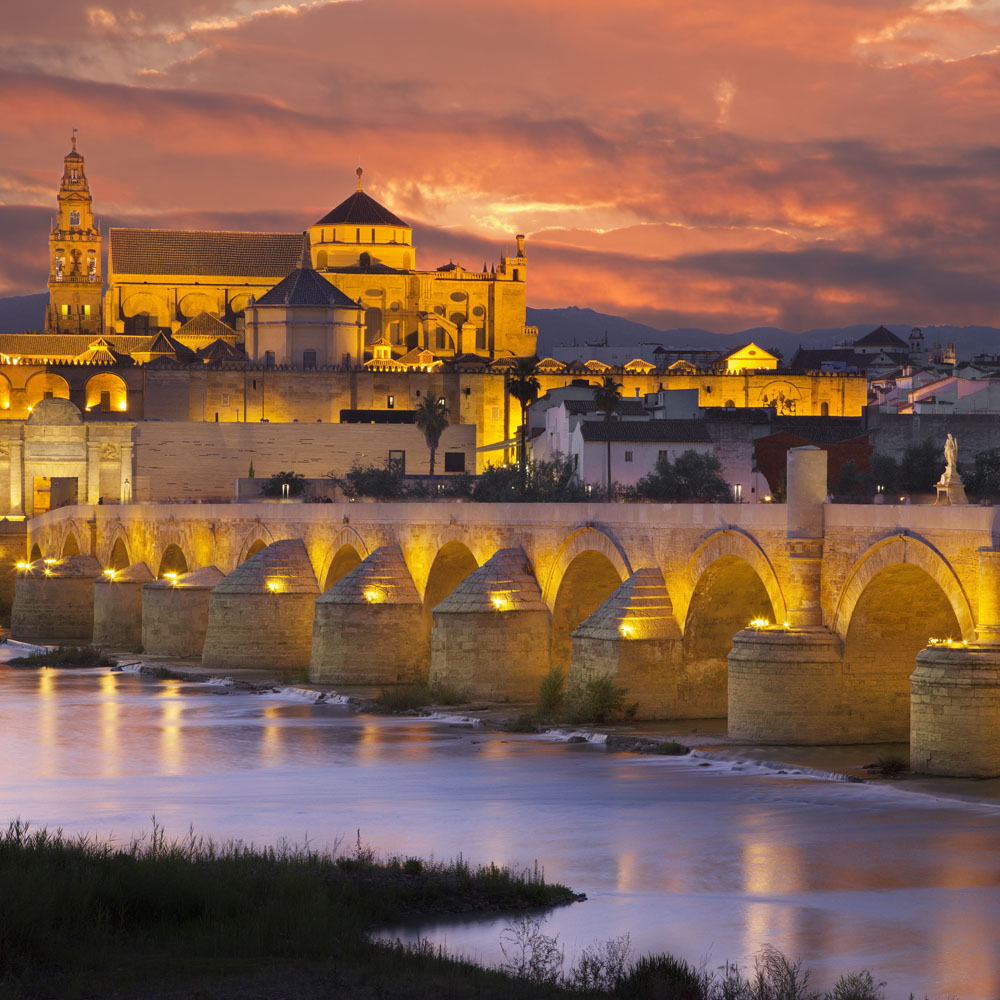 Granada enjoys a stunning location below the peaks of the snow-capped Sierra Nevada mountains.  High above the city sits the Alhambra, regularly listed as one of the must-visit places in the world.  During our visit we take in the vast gardens and the perfect courtyards, admiring the repeating arches and intricate tilework of the palace itself. The palace has become an icon for Moorish architecture, and it is easy to see why it is one of Spain’s most photographed locations. This evening, why not gather with your travelling companions for a final dinner in one of Granada’s many alfresco restaurants? 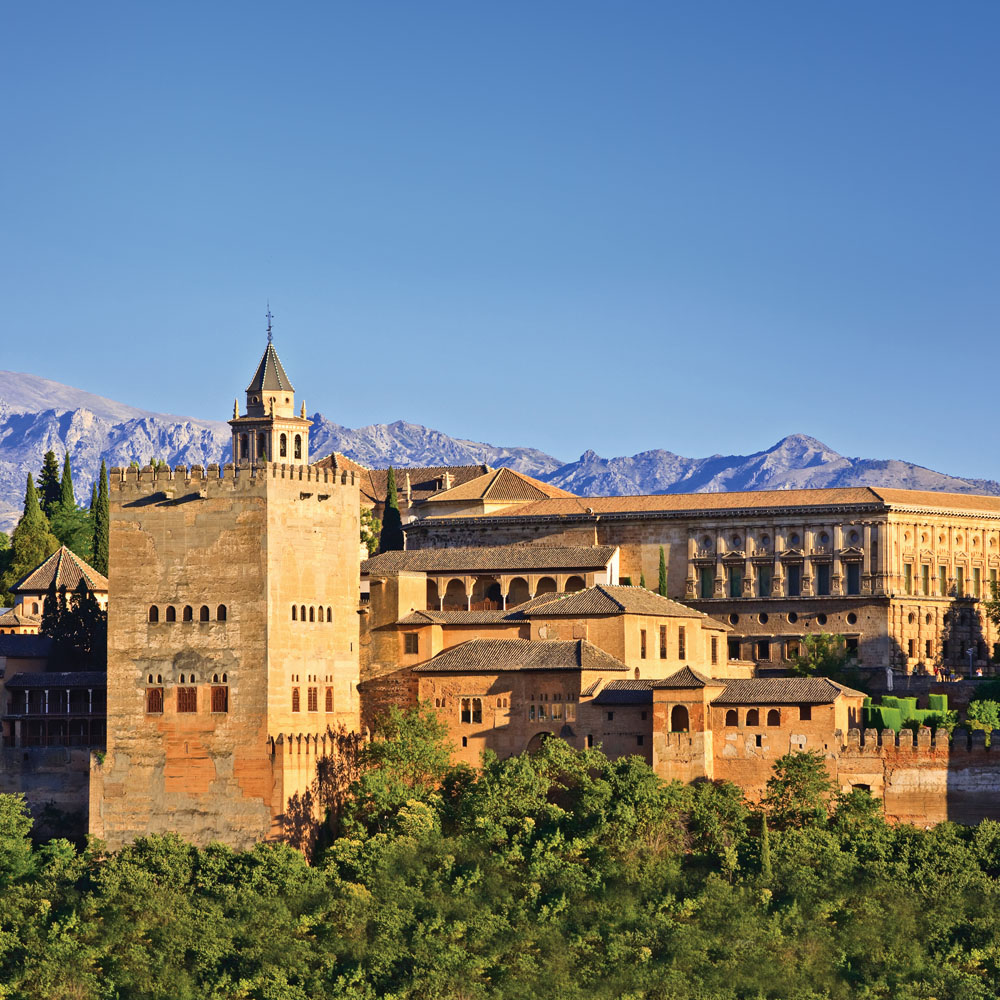 On our final day, we enjoy breakfast in our hotel before the coach takes us to Malaga airport for our return flight home after a trip to remember.

The price of this holiday is per person based on one person in a double/twin room for sole occupancy. The price includes:

Authentic flamenco show in Seville - from £33 per person

Witness a spectacular flamenco performance filled with passion and energy in a charming theatre. Enjoy a complimentary drink while you admire the superb artistry of world-class dancers, singers and musicians, who bring to life classics like ‘Carmen’.

Skip the queues by booking your entrance to the Alcazar in Seville, one of the largest palaces in Europe dating back to the Moorish golden age, and the jewel in Seville’s crown.

UK Citizens do not require a visa to enter Spain however must have a valid passport. For the most up-to-date passport and visa information visit https://www.gov.uk/foreign-travel-advice/spain/entry-requirements

Where the hotel features an outdoor swimming pool, this will be open in the summer months depending on weather.

I thoroughly enjoyed this trip, although we did have a bit of rain but thankfully some sunshine too. So much to see and do in each village and city we visited. I've certainly had my culture fix for a while. There was plenty of...

This was a brilliantly put together solo traveller holiday and brought to life by the lovely tour guide Sarah who looked after us so well. The balance of excursions and free time was well planned and took in the most amazing place...