Set on the banks of the Vistula River near the foothills of the Carpathian Mountains, beautiful Krakow ranks with Prague and Vienna as one of the architectural gems of Central Europe – in fact, its entire historic centre is a UNESCO World Heritage Site. The city first became prominent a thousand years ago as the royal capital of Poland and remained so for 500 years, spanning both the Middle Ages and Renaissance. Its castle, the Wawel, evolved into a sumptuous royal palace and took full advantage of its position on the ancient trade routes to the Orient and Baltic.

The city’s location and the trade in salt, which was extracted on a huge scale at the nearby Wieliczka mines, brought immense wealth and Krakow experienced its golden age during the 16th century, when learning and science prospered. Over the centuries, influence from Prussia and the cities of the Hanseatic League, and absorption within the Habsburg Empire, all made their marks on the marvellous architecture, art and culture of today’s city.

Our base for our festive stay is the fantastic four-star Novotel Krakow Centrum. Situated next to the banks of the Vistula and close to Wawel Royal Castle, this modern hotel has a bar, restaurant and fitness facilities, including an indoor swimming pool, while all rooms feature Wi-Fi, television, tea- and coffee-making facilities and safe. Its excellent location in the heart of Krakow is perfect for this special Christmas stay.

Arrive at the airport for your flight to Krakow, where you will be welcomed by your tour manager or a member of the Riviera Travel team.

On arrival, you’ll be transferred to the four-star Novotel Krakow Centrum, ideally located just a short walk from the castle and overlooking the Vistula river. This evening there will be a drinks reception hosted by your tour manager so that you can get to know your travelling companions before moving on to dinner at the hotel. 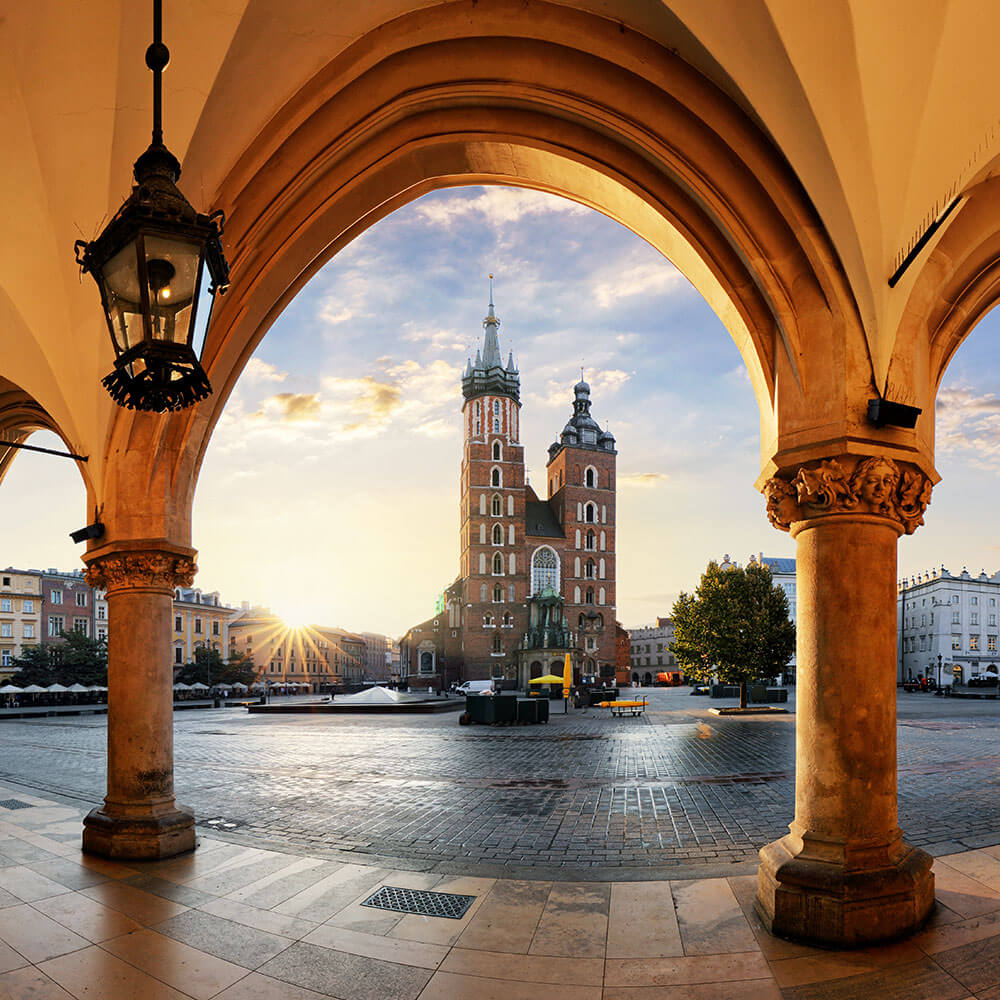 After breakfast, today we will have a tour of Krakow’s old town, one of the best-preserved medieval cities in central Europe. The city first became prominent a thousand years ago as the royal capital of Poland and remained so for 500 years, spanning both the Middle Ages and Renaissance. At Krakow’s heart is its magnificent medieval square – but there’s so much more – over 6,000 historic buildings and monuments, a multitude of museums, two and a half million works of art, one of Europe’s oldest universities and a fascinating Jewish quarter. Over the centuries, influence from Prussia and the cities of the Hanseatic League, and absorption within the Habsburg Empire, all made their marks on the marvellous architecture, art and culture of today’s city.

The main square and Cloth Hall are famous throughout the world, but are especially picturesque when lit up with Christmas lights that twinkle among the festive market stalls, selling famous amber jewellery. Perhaps sample some pierniki, Polish gingerbread made with ginger, anis, nutmeg and cinnamon before being decorated with eye-catching icing. Our tour concludes at Wawel castle, which was home to Polish monarchs for centuries. You can visit the royal apartments, armoury and cathedral, where the greatest statesmen of Polish history are laid to rest.

The city was spared significant damage during the Second World War, so today it’s a delight to explore and offers a real glimpse into the past. Yet Krakow is far from just a collection of buildings – its atmosphere is vibrant, with the past and present beautifully intertwined. This is especially true during the festive period where the singing of kolędy, Christmas carols, and people displaying their szopka krakowska, nativity scenes using Krakow landmarks.

After a free afternoon in the evening we will visit a nearby country restaurant set in a log cabin by a lake where along with dinner we will have a private folklore show with traditional Polish music and dancing. 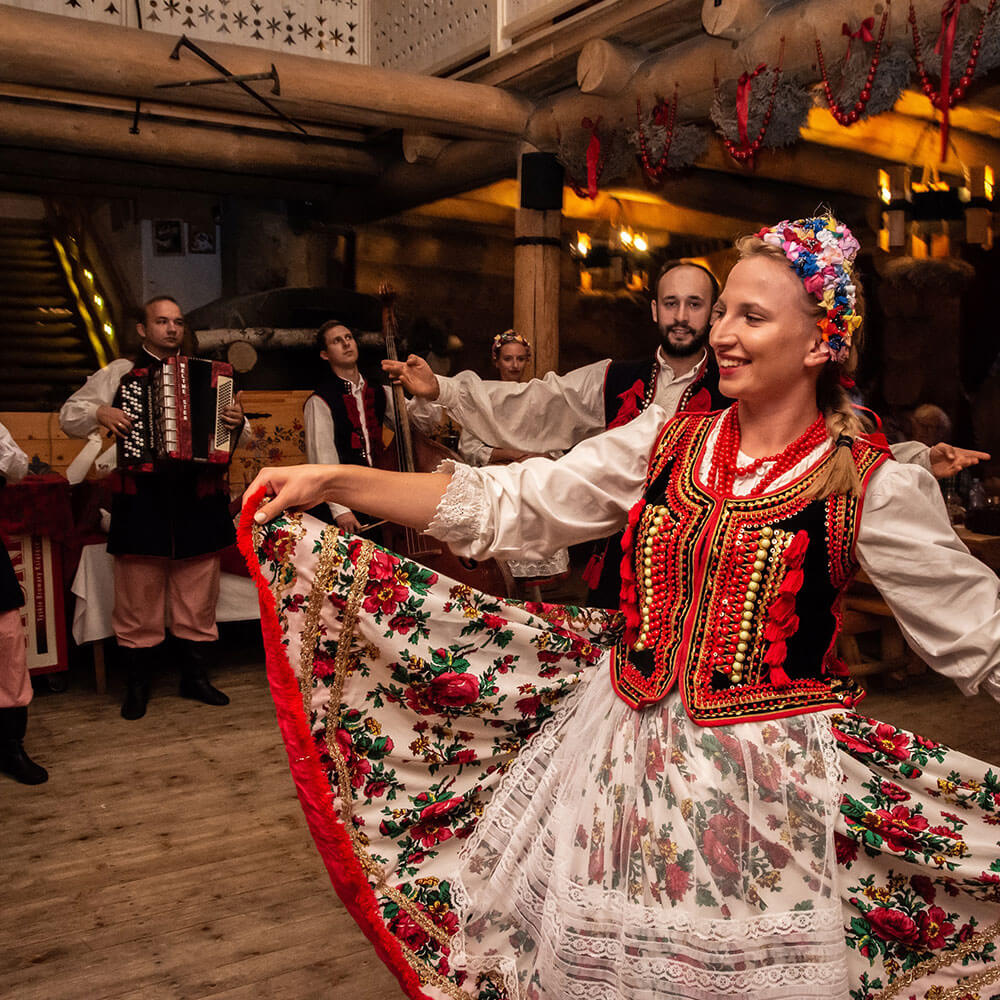 Today we will visit the Kazimierz district that was home to Krakow’s thriving Jewish community up until WWII. Although its history is sad, recently it has become a thriving cultural neighbourhood that has proudly re-established itself as a centre of a Jewish community. We will have a guided tour of the neighbourhood including the Old Synagogue, with some free time to discover the neighbourhood’s vibrant food scene over lunch. In the afternoon we will visit the moving Schindler factory, where you can learn more about the amazing stories of bravery and sacrifice endured by ordinary people.

In the evening we will have a Christmas Eve dinner at the hotel with the traditional 12 dishes that make up a Polish Christmas dinner. Known as Wigilia, the 24th December is an important date in the Polish Christmas calendar. To celebrate, friends and families rejoice over a table bursting with barszcz czerwone (beetroot soup), kapusta z groszek (cabbage with split peas), fried carp and a carrot, pickle and apple salad in a creamy mustard sauce, known simply as jarzynowa sałatka (vegetable salad). Of course, there are usually sweets too – in the form of poppy seed cake, soaked honey wheatberry dessert and Polish cheesecake. Sit back, relax, eat and make merry as you enjoy the most wonderful time of the year with your new-found friends. 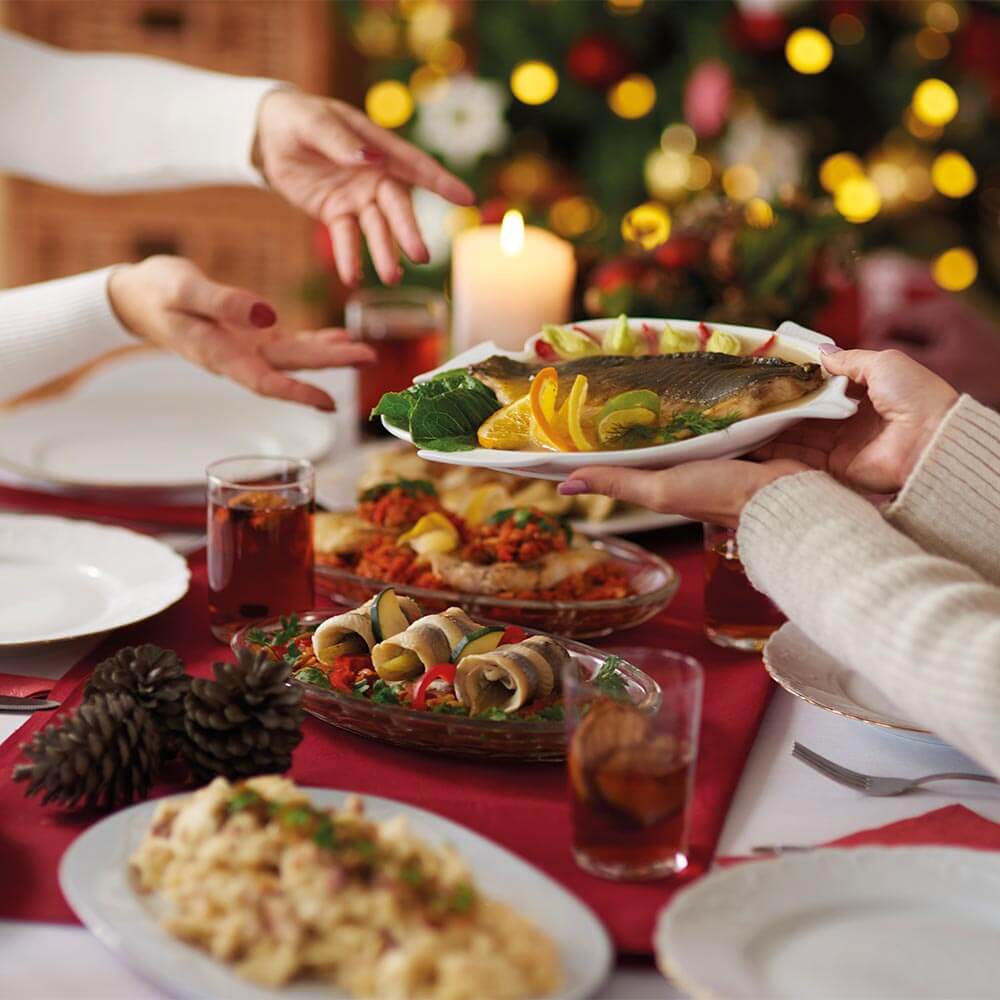 After a relaxing start to the morning with a generous buffet breakfast our local guide will take us on an epicurean tour of Krakow, sampling a multitude of local delicacies, such as grilled cheese with cranberry sauce, dumplings, traditional Polish Christmas wafers and many more. The rest of the day is at leisure – you can stay in the old town and explore the medieval winter wonderland, or return to the hotel and take advantage of the heated indoor pool and other spa facilities before tucking in to dinner with the rest of the group at the hotel this evening. 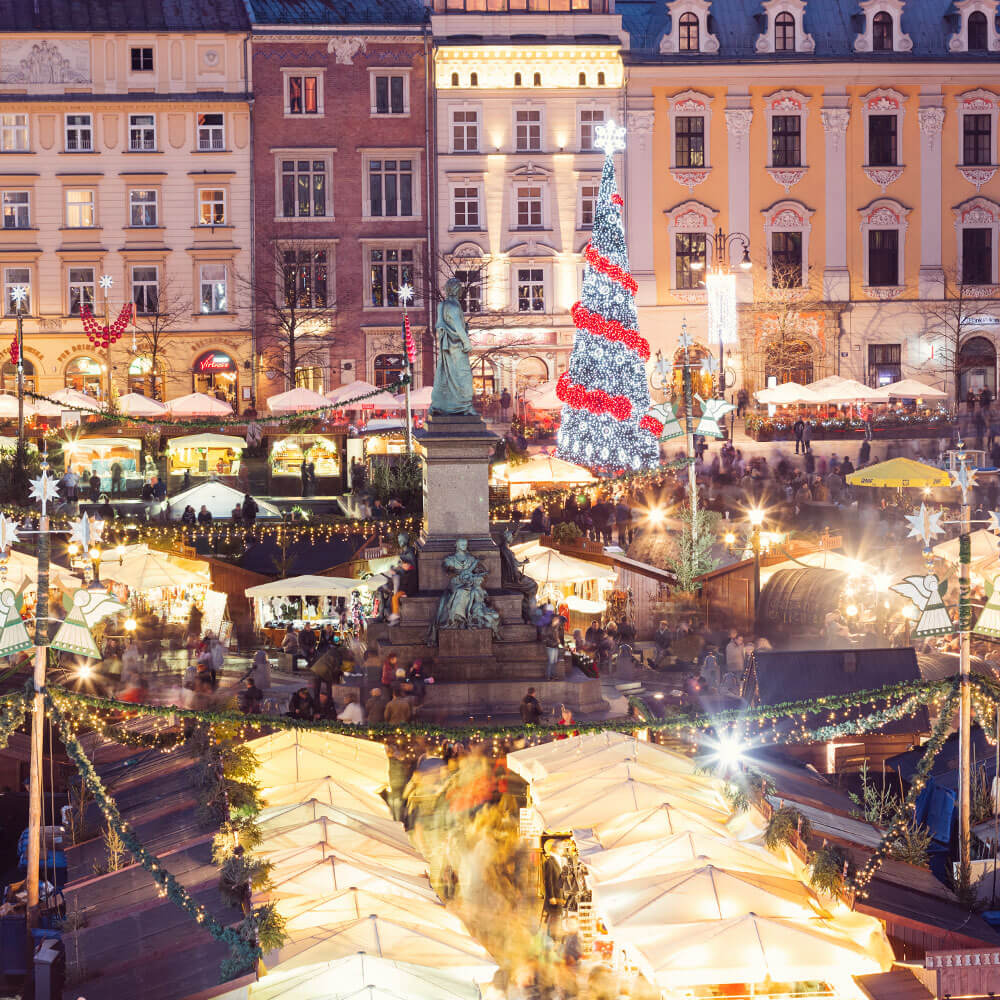 Today we will visit the nearby town of Wieliczka which has been famous since the Middle Ages for its UNESCO-listed salt mine, that formed the bedrock of Krakow’s wealth. This spectacular subterranean attraction is adorned by statues and even a cathedral, all sculpted from rock salt that looks like marble. Over time the miners delved ever deeper into the depths of the earth, excavating giant halls of salt.

After a guided visit of the mine we will return to Krakow where the rest of the day is at leisure for you to explore. For lunch, embrace the chance to try authentic Polish cuisine in one of the many traditional restaurants, serving up inviting meat platters, tempting pierogi (filled dumplings), popular potato pancakes known as placki ziemniaczane, and rustic stuffed cabbage rolls called golabki. If you’re feeling adventurous you may even want to try a Polish winter speciality: mulled beer!

This evening, re-join your fellow solo companions for a delicious farewell dinner, to share tales of a memorable Christmas experience. 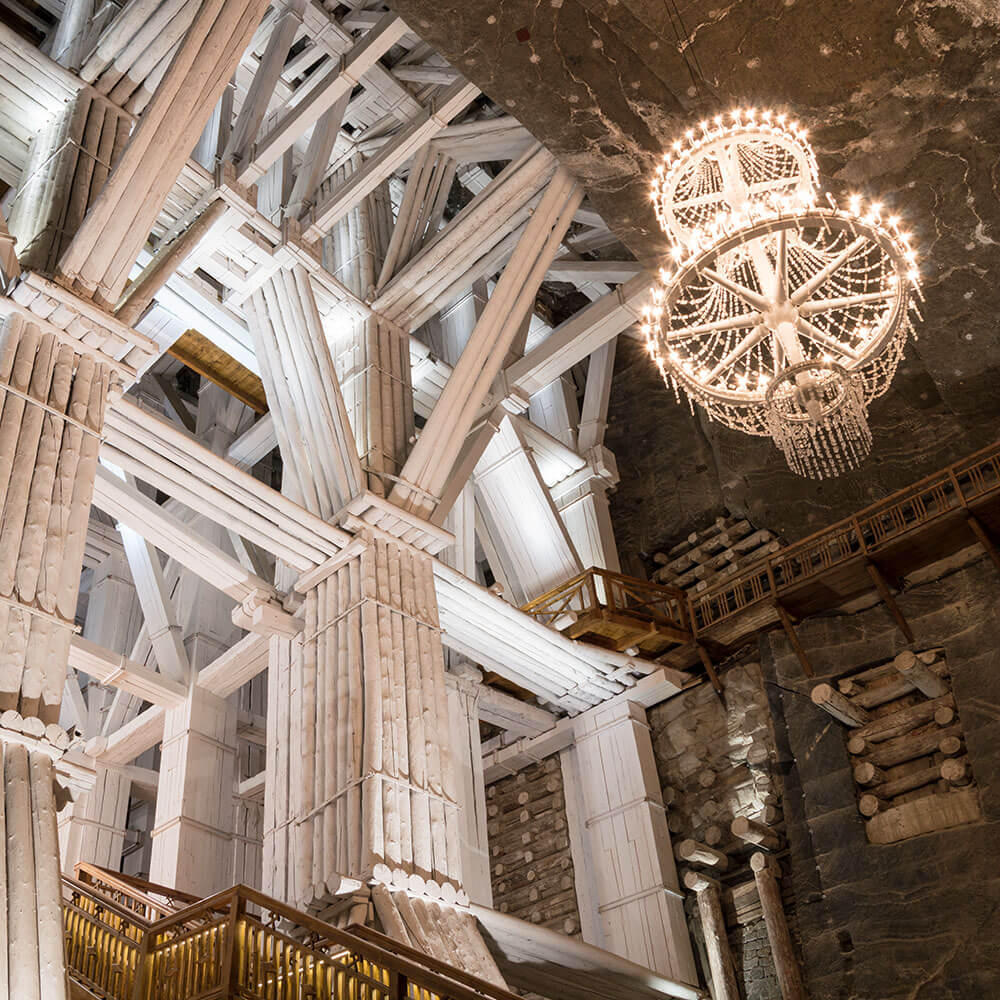 Transfer to the airport for our flight home.

UK Citizens do not require a visa to enter Poland however must have a valid passport. For the most up-to-date passport and visa information visit https://www.gov.uk/foreign-travel-advice/poland/entry-requirements

We want to ensure you make the correct choice before you book your holiday with us. If you have any concerns regarding the suitabilty of the holiday due to reduced mobility we would encourage you to call us to discuss these concerns. General information on mobility in connection with our tours can be found here.

Hi there I have just returned from a tour - Vietnam/Cambodia, and I just would like to say what a terrific time my friend and I had and speaking with the other holiday makers - they felt the same. Michelle, the tour manager was ab...

We have just returned from this tour which most certainly exceeded our expectations. The areas visited were just breathtaking. The highlight was the cable car up to Aiguille du Midi. The views just blew us away. Truly magical, to ...