So much to discover

"What Riviera are past masters of is thinking of the little things that make for a fantastic trip."

Imagine gazing out over an empty landscape of vast creaking glaciers surrounded by snow-capped peaks, the sea around you dotted with small icebergs. Look out for the huge black tailfins of humpback whales as they dive, whilst on land the low tundra vegetation is dotted with bright flowers taking advantage of the short summer warmth. Look a little more carefully and you’ll spot an Arctic fox or some Svalbard reindeer, and along the beaches maybe get close to a colony of walruses. As our ship skirts the pack ice, we may be lucky enough to spot a polar bear and her cub on their constant hunt for seals. A true Arctic adventure awaits you on our Spitsbergen seven-night cruise on board the four-star MV Ocean Atlantic!

After its first successful season in the Antarctic in 2019, the Ocean Atlantic will be sailing around the Svalbard archipelago, including its largest island of Spitsbergen, for summer 2021. Starting in the small Norwegian town of Longyearbyen, our ship will explore these magnificent inshore waters and fjords, and visit spectacular cliffs inhabited by thousands of seabirds. Svalbard is larger than you may think, three times the size of Wales, but with fewer than 3,000 permanent inhabitants – in fact, polar bears outnumber the humans!

June is the perfect time to spot the amazing wildlife of one of the world’s most fascinating and remote polar regions. Located well inside the Arctic Circle, you’ll experience the midnight sun whilst navigating through the narrow channels and fjords of this incredible Arctic wilderness. We’ll also aim to go around 80 degrees north to meet the edge of the pack ice and spot polar bears in their preferred habitat.

On our first night, you’ll have a night in Norway’s capital Oslo – a charming small city, with its futuristic waterside opera house and pedestrianised main street just a short stroll from our hotel.

Open all · Close all
Voyage to the Arctic & Spitsbergen

We fly direct to Oslo and overnight at the 4* Scandic Byporten. 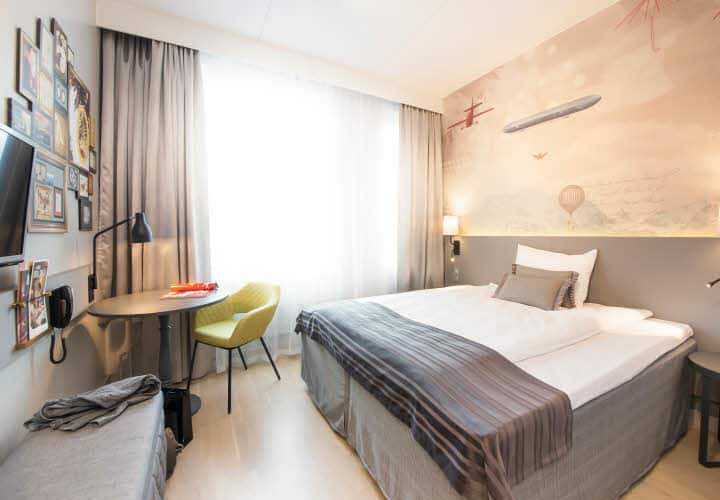 We fly from Oslo to Svalbard and board the MV Ocean Atlantic to begin our exciting Arctic voyage.

For the next six days, your voyage of exploration will take you to some of Svalbard’s innumerable bays and islands. Of course, it’s all weather-dependent, but normally our stops will include Ny- Å lesund, the world’s northernmost permanent settlement, as well as former whaling stations and walrus colonies. We’ll also sail north along the rim of the pack ice to spot polar bears in their natural environment. During the short summer, the local wildlife, such as reindeer and arctic foxes, are busy feeding their young for the polar winter to come. The birdlife is truly magnificent – watch out for Arctic terns, fulmars, kittiwakes, razorbills and guillemots, amongst the 80 recorded species found here.

The Ocean Atlantic’s fleet of sturdy Zodiac dinghies will allow us frequent shore landings and mini-cruises in the fjords to marvel at the vast glacial landscapes. At all times, the aim of the captain and expedition leader is to include as many shore landings and Zodiac excursions as possible to get the best views of the wildlife at close quarters.

In the evenings, you can look forward to informative lectures and presentations on all aspects of Arctic geography, wildlife and history, led by the various expedition leaders on board. After a nightcap at the bar, why not step outside again and enjoy the incredible light of the midnight sun as it skims the horizon – a wonderful time of ‘day’!

Disembark and board our return flight back to the UK via Oslo.

Want to print out the itinerary or share with a friend?

Get the itinerary sent straight to your inbox

George says: "I’ve always loved the natural world and other cultures and it’s my absolute passion to photograph them. I’m proud to say I’ve won a few awards for my work! I have led many photography tours and there’s nothing I love more than getting out into the wilds with my camera in hand."

Open all · Close all

Why should I choose Riviera Travel?

We care deeply about our customers and the holiday experience they have. We’re passionate about travel and we want all aspects to be perfect, with personal service and attention at every step of the way. Our world-class holidays include everything you need, with no detail overlooked. We carefully curate every aspect of your trip based on our own first-hand experience and expertise built up over decades in the travel industry.

What is included in the price?

The price of this holiday is per person, based on two people sharing a twin room/cabin and includes:

Cruise itinerary is subject to change depending on weather conditions. On-board currency is the US dollar.

What is not included in the price?

Single and upgraded cabins are subject to availability at the relevant supplement.

Not included: US$14 per person daily for cruise staff gratuities, all drinks on board including speciality coffees, Wi-Fi and phone charges and laundry.

Can I pre-book my flight seat?

Requests to pre-book your seat are subject to the airline’s conditions. If you would like to pre-book seats please contact our Reservations Team, we will be able to provide further information regarding the possibility and also the cost.

Are the flights direct?

Please contact us if you would like timings and/or further information on the connecting flights. All flight details will be listed in your booking confirmation.

How much is the deposit?

Deposit it £400 per person, payable at the time of booking.

Do I require a visa for this tour?

UK Citizens do not require a visa to enter Norway however must have a valid passport. For the most up-to-date passport and visa information visit https://www.gov.uk/foreign-travel-advice/norway/entry-requirements

Do I have to take any health precautions?

Whilst the travel schedule should pose no problems for people of any age in normal physical health, we should highlight that shore excursions are always over uneven, sometimes snow-covered ground, and involve sitting on the side of an inflatable Zodiac dinghy. Also, the top three decks on the ship are not served by lifts. For these reasons this holiday is not suitable for clients of impaired mobility. Please note the expedition leader reserves the right to deny participation in shore excursions to anyone deemed to pose a risk to themselves or others. As you will be travelling in remote areas without easy access to medical facilities, we recommend that you do not join this cruise if you have any life-threatening conditions or require regular medical treatment or supervision.

We want to ensure you make the correct choice before you book your holiday with us. If you have any concerns regarding the suitability of the holiday due to reduced mobility, we encourage you to call us to discuss these concerns. General information on mobility in connection with our tours can be found here.

Are there any specific booking conditions?

Our standard booking conditions apply, except for the following terms:
Payment: if booking within 14 weeks of departure, full payment must be made at the time of booking.
For full booking conditions, please visit www.rivieratravel.co.uk/docs/terms

"What Riviera are past masters of is thinking of the little things that make for a fantastic trip."

Have just returned from this Russia trip and feel quite exhausted after seeing and doing so much! It was a fantastic trip, we saw everything we would have wished to see in the company of our Russian guides and our leader Jelena wh...

A very special holiday that more than lived up to expectations. We covered so much in both mileage and culture in 3 weeks that it will take some time for us to fully appreciate all that we experienced Our tour manager Sam and ou...