Krakow is without doubt one of the most beautiful cities, ranking with Prague and Vienna as one of the real architectural gems of central Europe and its historic centre is a UNESCO world heritage site. The city first came to prominence nearly 1,000 years ago when it became the royal capital of Poland. It remained so for 500 years, spanning both the Middle Ages and Renaissance period. The castle evolved to become the sumptuous Royal Palace and was the centre of ancient trade routes to the orient and Baltic. This, together with salt (that vital commodity, which it possessed in abundance) ensured its immense prosperity, and the result is the amazing collection of palaces, aristocratic buildings and works of art that you see today. The city reached its zenith during the 16th century when learning and science prospered and over the centuries influence from Prussia, cities from the Hanseatic League and absorption within the Habsburg Empire have all left their classic and architectural influence, contributing to the masterpiece that is now Krakow.

Centred in a magnificent medieval square, the second largest in Europe, the statistics are staggering – over 6,000 historic buildings and monuments, 18 museums, 2.5 million works of art, one of Europe’s oldest universities and over 140 churches – many of them stunningly decorated in their own right. Spared any significant war damage, today the city is a delight to explore. Krakow is far from just a collection of buildings, its atmosphere is vibrant, alive and timeless with the past and present beautifully intertwined.

Poland and Krakow in particular have always been very religious and it is impossible to mention the city without including the Catholic Church. In 1978 the unknown Archbishop of Krakow was elected Pope John Paul II, the highest office of Catholicism, in what was at the time officially an atheist country. There is no doubt this fact unified the country, helped the Polish people to throw off the yoke of communism and led to a surge of self-confidence and optimism that is so evident today.

The city also boasts a great cultural past, which is hardly surprising from the country of Copernicus and Chopin. During the evening there could be nothing better than to attend one of the numerous classical music concerts that are held in churches throughout the city.

You should arrive at the airport to take your flight to Krakow. On arrival a coach will take you to our hotel, the four-star Novotel, very modern and well managed, it is centrally located, within walking distance of the main sights and has a bar, good restaurant, fitness facilities including an indoor swimming pool and all rooms are air-conditioned for your additional comfort. 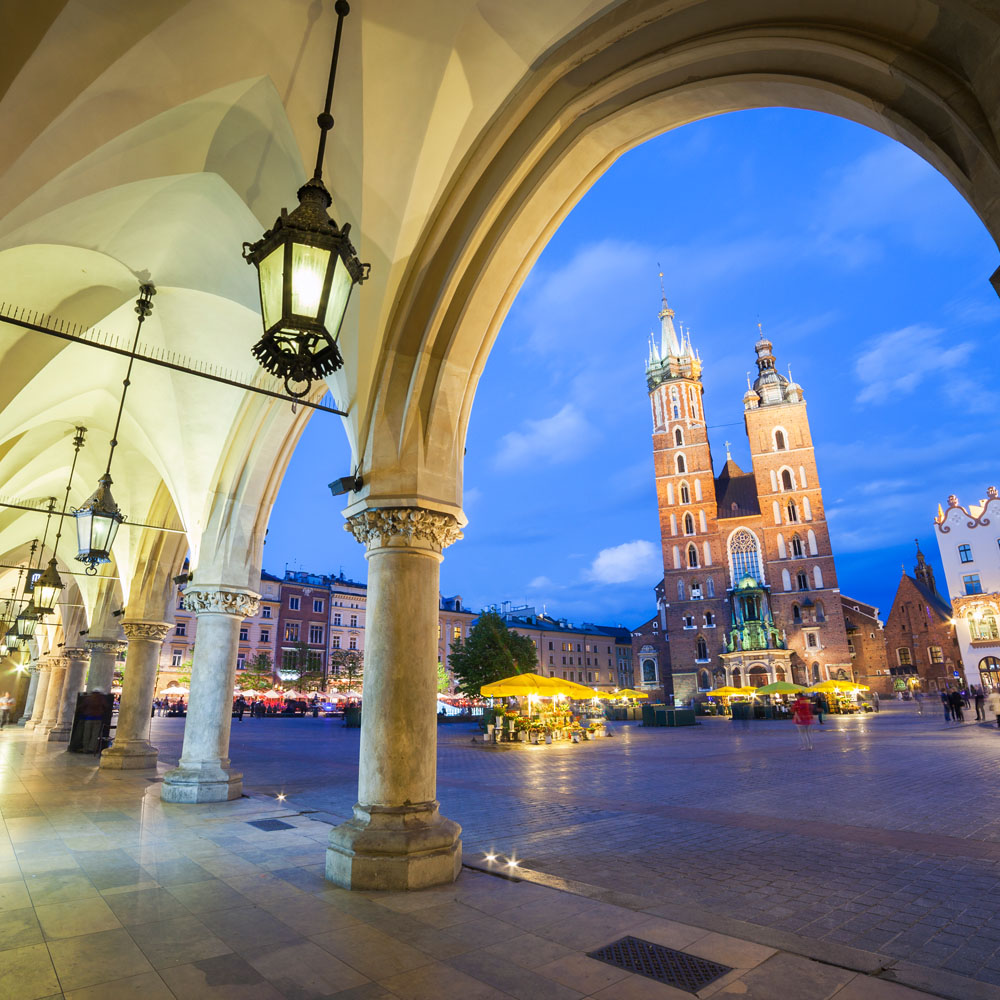 After breakfast we will have a walking tour of Krakow, following which we defy you to disagree that this is one of the most beautiful cities you have ever seen.

During our tour we will see the amazing Rynek, the main square, lined with exquisite medieval buildings and always busy with locals going about their daily business, exchanging a few words or enjoying a coffee in one of the numerous street cafés. In the centre is the Cloth Hall, which as its name suggests, has been used for textile trading since the 16th century. Today it is full of small stalls selling beautiful, locally-made amber jewellery and an art gallery. Overlooking the square is St. Mary’s church so richly decorated with fine paintings, gold-leaf and silverware, it could be mistaken for a cathedral. The 14th century stained glass is particularly ornate with striking beams of light creating a kaleidoscope of colour in the chancel below. Since medieval times, from the top of one of the two ornate spires a trumpeter sounds a warning of potential attack every two hours. You will also see the immense Florian Gate and the remains of the medieval fortifications built to defend the capital of Poland and the church where years later Pope John Paul II held Mass to a grateful congregation.

We will see a host of other sights too, including the University and Collegium where the famous astronomer Copernicus theorised that the earth was not the centre of the solar system – bravely driving a coach and horses through centuries-old scientific thinking!

Later we visit the Wawel castle district which, dating back to the 11th century, is built on a bend on the river Vistula below and dominates Krakow. This was the political and cultural capital of Poland for over 500 years and today the myriad of buildings comprise amongst others, the Royal Palace, Cathedral, Senators’ Hall, Treasury and Armoury. We will see the cathedral that is the final resting place of the Polish monarchs. You can tour the Palace and Royal chambers which host an impressive range of rooms that have been restored to their original and stunning Renaissance and Baroque state, overflowing with fine furniture, works of art and Europe’s largest collection of tapestries. There will be free time to explore the rest of the complex, including the wonderful three-tiered Renaissance courtyard.

This afternoon, should you wish, you will have the option of a tour to the famous Salt Mines (your tour manager will advise locally of the times and costs). 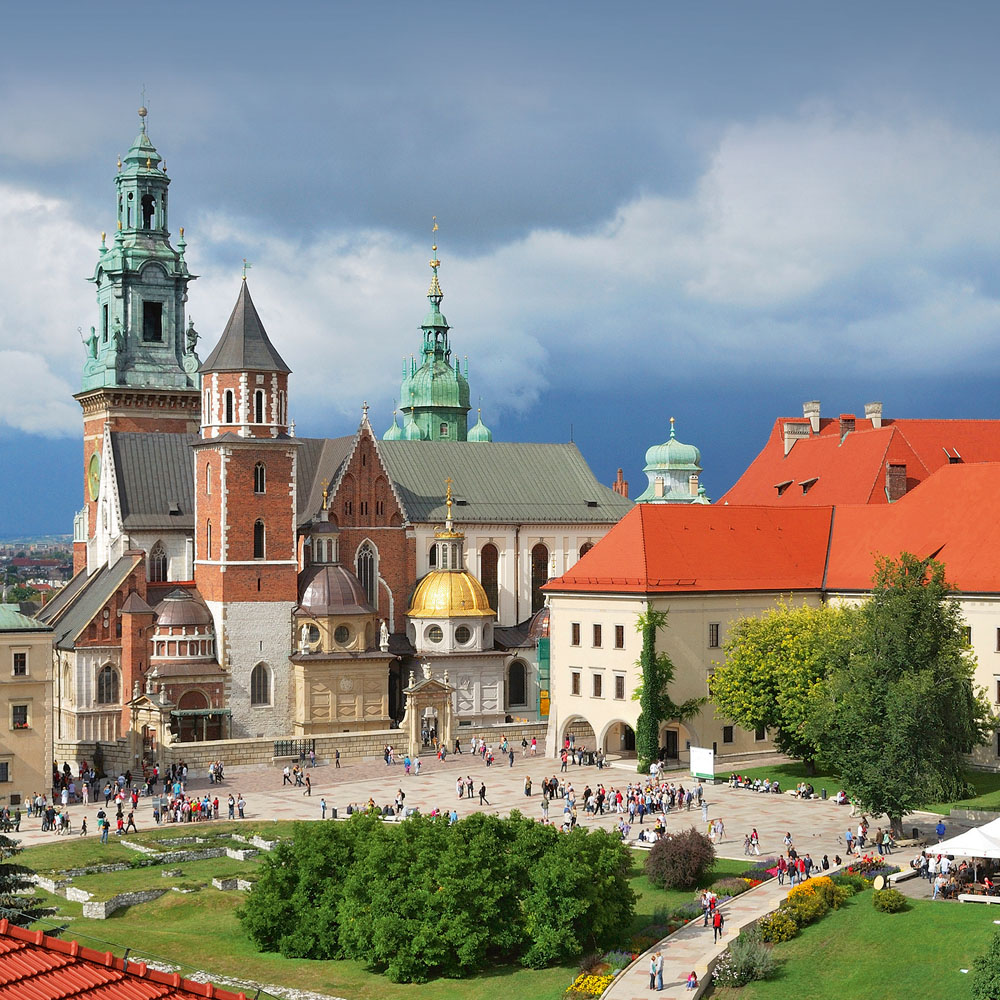 We thought long and hard about how appropriate it would be to include this morning’s destination in a holiday – Auschwitz and Birkenau. These places need no introduction. As a company, our philosophy is that we try to inform our clients about all aspects of the countries we visit, which includes the history as well as visits to ‘tourist musts’.

Auschwitz has been left virtually as it was when it was liberated in 1945. It is now a museum and monument. This morning’s guided tour will be extremely moving. First we visit Auschwitz and then nearby Birkenau and the notorious watchtower from where we can appreciate the sheer scale of the atrocities that happened. We return to Krakow during the afternoon and the mood will immediately lift as we have time to explore Krakow’s beautiful range of attractions. Alternatively, if you wish to stay in Krakow for the full day, you are free to do so. 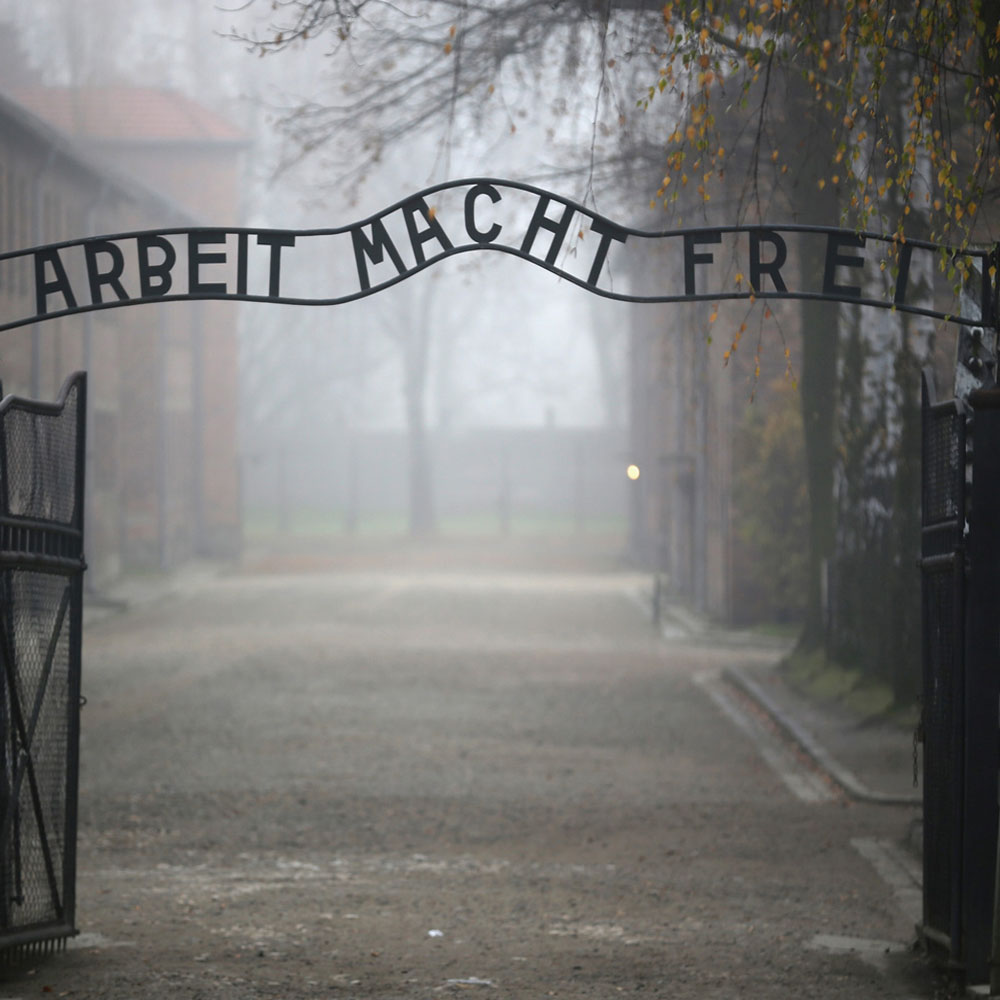 At the appropriate time the coach will return us to the airport for our return flight.

Sample over a dozen types of traditional and authentic Polish and Krakow specialities, including Polish vodka and craft beers, with a local guide. Discover places loved by locals and explore the historic neighbourhood of Kazimierz. Your friendly guide will regale you with stories of the cultural traditions and history of the places we visit and the foods we try. We recommend a healthy appetite for this filling 3.5-hour walking tour.

UK Citizens do not require a visa to enter Poland however must have a valid passport. For the most up-to-date passport and visa information visit https://www.gov.uk/foreign-travel-advice/poland/entry-requirements

Met at Krakow Airport by the wonderful Carolina. Very smooth transition and we were on our way to Novotel Centrum, being fed verbal information backed up with a great information sheet. Nice welcome and smooth book in at hotel whi...

A most enjoyable trip to beautiful city of Krakow. Our tour manager Karolina was first rate, meeting us at the airport, giving us maps, suggested places to visit and list of recommended restaurants. She slotted in a short orientat...