Time to Catch Up

Explore even more! Book a second 2022 holiday and save 20% if your second holiday is a river, yacht or ocean cruise of 8 days or more.

Offers available on this holiday

Book either two new holidays or a second holiday between 1 April and 31 July 2022 and save 20% on your second holiday if it is a river, yacht or ocean cruise departing in 2022. Savings will be applied to your final balance post-booking. Find out more

Change your holiday for free for any reason right up until your final balance payment is due.

If the price of your holiday reduces after you've booked, we'll reduce the price for you - or refund you the difference.

You can't find the same quality of holiday for less with a competitor - if you do, we'll match the price.

A culture steeped in Norse mythology and a landscape forged by the elements and volcanic forces. Be humbled by the earth’s overwhelming power, delightful puffins and magical whales.

In this modern age there is sometimes a tedious similarity between countries across the globe, with the same old multinationals, predictable restaurant chains and designer shops. Iceland though is such a refreshing change; a wonderfully welcoming place, like nowhere else with friendly yet fiercely independent people, a culture steeped in Norse mythology and a landscape forged and still being moulded by the essential forces of water, ice and fire.

You should arrive at the airport to take your flight to Reykjavik from your selected airport. On arrival, you will be taken to your selected hotel. The rest of the day will be spent at leisure, allowing you time to settle into the hotel and start exploring if you wish.

Today we explore Iceland’s delightfully diverse south west shoreline firstly climbing through a remarkable lunar like landscape of multi-coloured lava plateaux, through the Threngli Pass and descending across the sparkling River Olufsa – famous for its excellent salmon. Some of Iceland’s prettiest landscapes now lie before you as we pass farms and charming villages set amongst pleasant pastures – keep an eye open for the exceptionally hardy Icelandic horses. To the north you can see Myrdalsjokull and Eyjfjalla Glaciers - the latter famous for its volcano below, which infamously halted Europe’s air traffic in 2010.

We head for two of Iceland’s most spectacular waterfalls, Seljalandsfoss tumbles ribbon-like over a great overhanging lava cliff whilst Skogafoss is one of the country’s highest, plunging some 60 metres in an impressive shower of shimmering spray. The natural wonders continue as we approach the imposing wall of ice forming the snout of the immense Solheimajokull Glacier. You may notice a sulphurous hint in the air here, as the waters emanating from the glacier here are called “Stinking River” due to the sulphurous acid content absorbed from the hot geothermal rocks beneath your feet. Next we travel to Reynisfjara, close to Iceland’s southernmost point, to see the famous black-sand beach. Depending on the time of the year, you may be lucky enough to spot the renowned Atlantic puffin colonies.

Late morning we enjoy a sightseeing tour of Reykjavik situated around its natural harbour on a fjord. You then have a choice of two completely different yet very special experiences: a boat trip in search of whales and dolphins, or a relaxing bath in the Blue Lagoon.

We take a boat out in search of two of the planet’s most graceful creatures. Depending on conditions and with a little luck, we may see some of the many species of whales living in Icelandic waters, such as humpbacks and killer whales, though more common are minkes as well as dolphins.

Alternatively, you may choose to visit Iceland’s celebrated Blue Lagoon, where there’s the opportunity for a unique bathing experience. Against a stunning volcanic backdrop, you can enjoy a restorative dip in the lagoon’s mineral-rich waters, which are geothermally heated to a constant 38 degrees Celsius.

Today we embark on a full day tour around the Golden Circle, aptly named due to its dramatic cocktail of amazing geology, geography, politics, history, culture, raw natural energy but most of all scenery which takes your breath away. Iceland has literally spilled into the sea from the “Mid Atlantic Rift” where the two great American and Eurasian tectonic plates tear apart. Firstly we drive past steam jets ominously and noisily erupting from the bare earth, seemingly from a submerged steam train. Normally hidden from our gaze, we astonishingly experience the dramatic effects of these massive forces at Thingvellir. Here you stroll along a striking chasm left as the plates diverge leaving two great rock scars either side – stretch out and you literally touch both continents simultaneously! Continuing to the Hvita river, just upstream lies a layer of varying rock ‘pavements’ and as we approach this wild location a distant smoke-like spray column rises above the lava fields. This incredible natural wonder promotes complete awe and you will immediately understand why the locals named them Gullfoss – the Golden Waterfalls.

Next a third spectacular natural phenomenon, the Haukadalur, one of the world’s most active geothermal areas. Here you experience the amazing Strokkur, a pool of slowly bubbling, gurgling, steaming water quietly simmering away until, with almost no warning, it erupts with a roar in a towering jet of steam shooting 20 metres or more above your head. Strokkur is the most impressive geyser, an unpredictable phenomenon named after the biggest hereabouts known locally as Geysir. By now you really feel you are in an unknown ‘other world’ where nature dominates and the planet is young, a land devoid of trees and almost of grass itself – its work in progress and a glimpse of our own country millions of years ago. We then return to our hotel after an incredible day.

Today you will be taken to the airport at the appropriate time for your return flight home after a thoroughly memorable tour.

Along with your experienced and knowledgeable tour manager and local experts, you’ll discover so much on our award-winning Classic tours, offering the best value for money way for you to explore the world.

Our tour managers have been rated as the best in the business for their knowledge and experience and will go above and beyond to ensure every aspect of your holiday runs smoothly – so all you need to worry about is your packing.

You're Free to Choose

Everyone’s idea of the perfect holiday is different, which is why on this tour we offer a thoughtfully crafted itinerary choice, carefully selected to give you a more well-rounded and personalised holiday. And of course, it's included in the price.

On day 3, take an exciting boat trip to spot whales and dolphins, or relax with a soak in the Blue Lagoon, Iceland’s famous geothermal spa.

UK Citizens do not require a visa to enter Iceland however must have a valid passport. For the most up-to-date passport and visa information visit https://www.gov.uk/foreign-travel-advice/iceland/entry-requirements

During the whale and dolphin watching cruise, Riviera Travel cannot guarantee the sight of any animals as this is entirely dependent on weather. 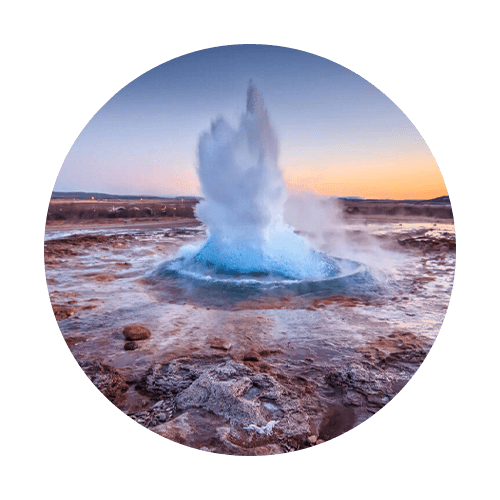 Brilliant tour. Kristofer was the best guide I have had, and I have travelled with Riviera many times. Iceland is a wonderful place. Of course we only saw a small part of the country, but it was a marvelous experience. The food wa...

My husband, daughter and son-in-law have just returned from a wonderful break in Reyjkavik in Iceland. We saw some fabulous scenery and the tours we were taken on were perfect. The hotel was in a great position right on the wate...